Arsenal vs Rapid Vienna prediction: How will Europa League fixture play out tonight? 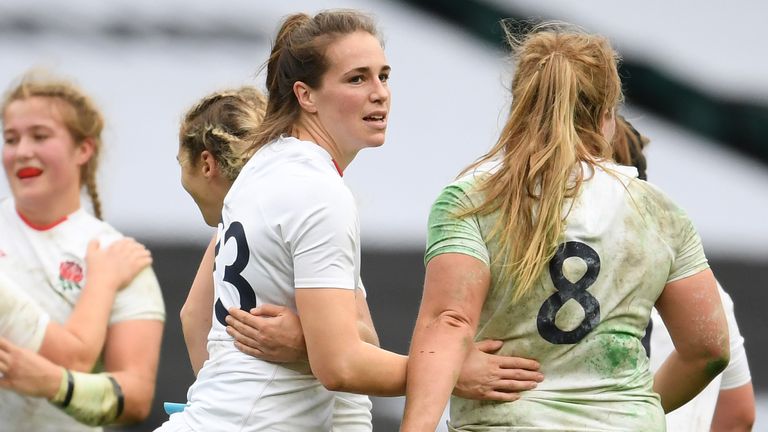 Simon Middleton’s side scored 15 points in the final 10 minutes to steal victory from Les Bleues, ending their 2020 campaign unbeaten, and cementing their position as the number one team in the world.

What a comeback from the Red Roses! 🌹

We win it with the final kick of the game. @EmilyScarratt nailing the penalty on full time.

A week after defeating the same opponents 33-10 to become the number one ranked side in the world, England looked to be heading for defeat when Cyrielle Banet crossed the line to give France a 13-point lead with 15 minutes to go.

However, Poppy Cleall reduced the deficit before Ellie Kildunne’s converted try moments afterwards brought England to within two points, and Scarratt held her nerve at the death.

She split the posts from 20 metres out as the Women’s Six Nations champions claimed a seventh successive win against a crestfallen Les Bleus outfit.

Despite falling behind when Zoe Harrison touched down first for the hosts, France were much tougher proposition than last week and Caroline Drouin’s penalty was followed by tries from Emmeline Gros and Banet.

Lark Davies reduced the deficit after half-time but another Drouin penalty and Banet’s second try of the game looked to be decisive, until England hit back in a dramatic last 10 minutes.

First Cleall crossed for her 14th Test try off the back of another rolling maul. Two minutes later Ellie Kildunne powered over, and Scarratt’s extras made it a one-point game.

Then the Red Roses battered away at the French line in the dying seconds of the game and forced an 80th minute penalty. Up stepped Scarratt to slot it and confirm a two-point win.

The Red Roses are now on a seven-match winning streak against France and have won 11 of the last 12 meetings.

Related posts:
MLB News:
The seven most intriguing MLB free agents from record crop of non-tendered players
UCF QB Milton enters portal, seeks starting job
Source: Torn ACL confirmed for Steelers’ Dupree
Short-handed Ravens show resolve in defeat to undefeated Steelers
Basketball News:
Rockets trade Russell Westbrook to Wizards for John Wall in blockbuster deal
NBA schedule release: Here are the Opening Night, Christmas Day games for 2020-21 season
KD’s Nets vs. Dubs to tip off NBA opening night
Recent Posts
This website uses cookies to improve your user experience and to provide you with advertisements that are relevant to your interests. By continuing to browse the site you are agreeing to our use of cookies.Ok