Jayden Hunt trained fully on Tuesday, adding a further selection headache for Melbourne, whose captain Max Gawn declared it would be a “massive call” for the Demons to make a change ahead of Friday night’s preliminary final against Geelong in Perth.

That shapes as bad news for veteran Nathan Jones, one of several experienced Dees fighting to break into a side that is just two wins away from ending a 57-year premiership drought, the longest active streak in the AFL. 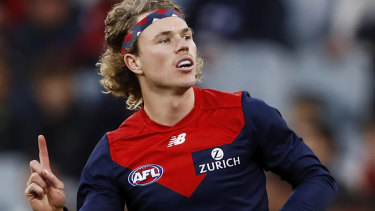 Jayden Hunt celebrates a goal during the round nine clash between the Demons and the Blues at the MCG.Credit:AFL Photos

Rebounding defender Hunt hasn’t played since round 21, when he went down with an ankle injury, but vice-captain Jack Viney said the backman had trained fully on Tuesday, adding another layer of complexity to the decision-making at Melbourne match committee this week.

“I think he’s a serious chance,” Viney said of Hunt on Tuesday. 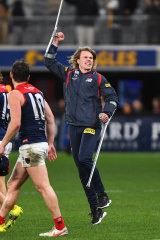 Jayden Hunt has recovered from his ankle injury.Credit:Getty

“He fully trained today. So I guess it’s now up to the match committee to determine whether they think he’s ready to roll.”

The sentimental favourite at selection is the former skipper Jones, who has been out of the side for much of the season but was named as an emergency for Melbourne’s qualifying final win over the Brisbane Lions.

Speaking on RSN radio on Tuesday, Gawn said that Jones was knocking on the door of selection but that he was not alone.

“There’s no sugarcoating this. He is the 24th player currently right now. Obviously the 23rd [medical sub] on the weekend was Jimmy Jordon, and the 22 that played. [Jones] is probably sitting 24, I mean [Jake] Melksham, Michael Hibberd and Jayden Hunt are all there as well, so there’s probably four guys that are trying to get into this team, and Goody’s [coach Simon Goodwin is] going to have a long discussion,” Gawn said.

“We were a team that won on the weekend by 40 points in a qualifying final with no injuries. It’s a massive call to make a change. Will Nathan be able to stand up in a hot prelim final more than James Jordon if called on as sub? James Jordon has put in a great body of work, 23 weeks, that’s been a great body of work that definitely deserves his chance, and Jake Melksham did a great job…four weeks ago on Jeremy McGovern. 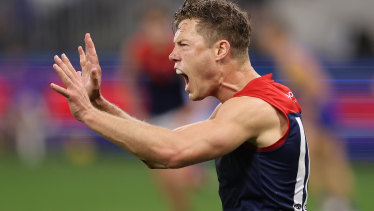 “I don’t envy what Goody’s got to do, but there’s no sugar on this situation. There [are] five guys fighting for a spot in this side, and it keeps the other 22 guys who are in the team quite hungry, knowing that they’re one slip-up, one poor game from missing out on a prelim final.”

Having not contested a grand final for 21 years, the Demons return to the scene of their most recent preliminary final, a heavy loss to West Coast in which Melbourne were held goalless until after half-time. While Viney rejected the idea of that defeat having a steeling influence on him or the other remaining Demons from that match, he suggested that it was a reminder that opportunities don’t come around that often.

“I probably should say yes. But I haven’t really drawn on that experience too much. It does feel like a lifetime ago,” Viney said.

“I do feel like this group is in a much different position, I feel like the build-up’s different, you very rarely get these opportunities in football, and that’s what I learnt in 2018, you just never know when you’ll end up in this position, so you’ve got to make the most of it and that’s what we’re working hard to do.”

The Demons slumped to 17th the following season before finishing ninth last year and surging to the minor premiership in 2021.