Mark Korda has been appointed Collingwood president, ending an impasse at the club after Eddie McGuire’s departure.

The board made the decision on Wednesday, with Korda winning the presidency ahead of Peter Murphy, his interim co-president. 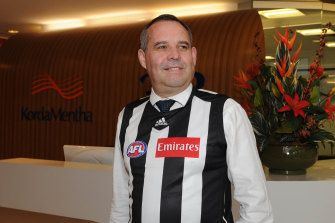 While Murphy had been the initial favourite to take over, Collingwood sources said throughout that Korda had been unequivocal in his desire for the job, while Murphy had expressed more ambivalence about taking on the presidency.

Some AFL officials had been concerned about the length of time it was taking Collingwood to appoint a successor to McGuire.

The former president announced on Wednesday night that he was returning to Fox Footy and will call Saturday’s clash between Carlton and Brisbane.

“It has been a long time between drinks, a big game and looking forward to it,” McGuire told Nine’s Footy Classified.

Korda’s appointment was met with criticism from some parts of Collingwood’s fan base on Wednesday night. Some felt the appointment did not make a sufficient break from the past, in light of the Pies’ recent issues, including those revealed in the Do Better report into racism and the club’s salary cap problems over recent years and their fire sale in last year’s trade period.

This has prompted external speculation and discussion amongst fans about the prospect of an extraordinary general meeting (EGM) to be called to challenge the board.

In recent days there had also been a push for ex-AFL lawyer and powerbroker Jeff Browne to be parachuted in as president to resolve the apparent impasse, a move backed by prominent player manager and ex-premiership player Craig Kelly. Browne is a close friend of McGuire and has been involved in some of the AFL’s biggest decisions over the decades.

The Pies also added VRC chairman Neil Wilson to the seven-member board, filling the spot vacated by McGuire.

Holgate had been charged with the responsibility of searching for new board members, a search that landed Wilson.

The Pies also interviewed Cycling Australia chairman Duncan Murray and music executive Dan Rosen for positions on the board.

Sources familiar with the situation said that the Magpies intended to appoint a woman on to the seven-member board – having only six after McGuire’s departure – with another vacancy slated to be filled later this year when long-serving board member Alex Waislitz is expected to step down.

Korda, one of Australia’s best known and renowned corporate recovery specialists, has served on the Collingwood board since 2007. His company, KordaMentha, has stepped in as administrator for some of Australia’s biggest corporate collapses and recoveries, including Ansett and Channel 10.

“Collingwood has long held a place in my life and I take on this role with the strong belief that we have in our possession a wonderful legacy, a strength and spirit with which we must seek to do and be better. We have challenges but great people and passion to meet them,” Korda said in a statement.

“Collingwood has been made by many and it will take many to drive it forward. I thank Peter Murphy for his support, particularly over recent months, and his determination to see Collingwood continue to flourish. We have worked closely and talked daily over the past months and will continue to do so. I welcome Neil to the board.

“I also thank and pay tribute to Eddie for a contribution that may be the equal of any in the club’s 129-year history. His time was a transformational one that we must honour by creating a new age of prosperity and growth for Collingwood.

“There is a collaborative commitment from the board to serve our club and create real progress that will live on through those who follow.”