Jake Friend’s teammates claim the Roosters’ conservative history dealing with concussion means they won’t rush into any decision with their co-captain as Trent Robinson safeguarded the club’s dwindling hooker stocks.

On the same day Joseph Suaalii furthered his case for an NRL exemption to play before his 18th birthday with a two-try debut for North Sydney in the NSW Cup, Robinson pulled back-up No.9 Freddy Lussick from the same game with Friend all but certain to be rested for round two. 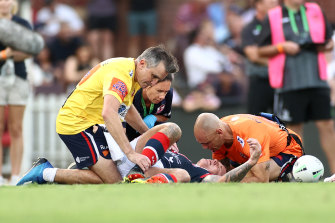 Roosters veteran Jake Friend is no stranger to concussion.Credit:Getty

“Our club has had to deal with a fair few situations and it’s pretty clear how they deal with them,” Keary said. “The player’s safety is always front of mind, and it will be no different this time.

“He looked in good spirits [after the game] and hopefully he recovers well for us. The doctors will do their thing, he will go through the protocols and we’ll make sure we look after him.”

Cordner will miss at least 12 rounds as he undergoes a staged return to play following a head knock during the Origin series opener last year.

The Roosters applied for salary cap exemption given the incident came in a representative game. It was one of multiple concussions Cordner suffered last year.

‘He’s so tough it’s hard to get a gauge on him, but we obviously missed him out there when he went down and we don’t want to see that.’

It means Robinson could be looking for a new captain in the short term with Friend likely to be rested in the immediate future.

On Friend, Tedesco said: “He’s so tough it’s hard to get a gauge on him, but we obviously missed him out there when he went down and we don’t want to see that.”

Independent neurologist Chris Levi, one of a pool of concussion experts who consult with NRL clubs, has previously described the Roosters’ approach to brain injuries as “even more conservative than my advice”. Levi was one of several neurologists Cordner has visited for assessment in recent months.

The Friend issue comes as former Prime Minister John Howard lent his name to Brain Awareness Week to highlight the need for further work on concussion in sport. 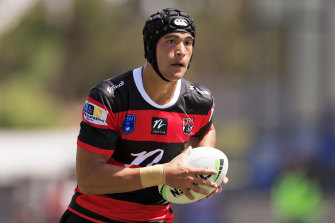 “The reason I’m doing this is that I want parents to feel that participation of their children in body contact sports is as safe it possibly can be,” Howard said before a major Macquarie University virtual seminar on Tuesday.

“The concern out of concussion is not born out of hostility to sport, it’s actually born out of a desire to make the playing of sport as safe as possible.

“The long-term consequences of concussion can be serious and everybody wants to see the issue challenged and dealt with, but dealt with in the context of promoting sport, not censoring sport. I want sport participation to be widespread and safe – and this is what this campaign is all about.”

Robinson’s injury woes were only compounded on Sunday when utility Adam Keighran was confirmed to have broken his wrist in the SCG clash.

Meanwhile, Suaalii’s first competition game against men would have brought a smile to Robinson’s face as he leapt high into the air to catch a Drew Hutchinson bomb for his second try in the Bears’ wild 48-20 loss to Blacktown.

Roosters-contracted winger Matt Ikuvalu was sent off for grappling with Haumole Olakau’atu as he tried to rise from a tackle, the contact causing Olakau’atu to writhe in agony with a dislocated elbow. Ikuvalu protested vigorously against the decision.

Walker set up both of North Sydney’s first-half tries – including one for Suaalii – as Cade Cust appealed to Manly coach Des Hasler for inclusion in the NRL squad with a hat-trick of tries for Blacktown.