Frawley and Lockett, both products of the Saints' Ballarat recruiting zone, were bookends of St Kilda's side for a decade, with Frawley captaining St Kilda between 1987 and 1995, and Lockett becoming the Saints' most prolific goalkicker before leaving the club for Sydney at the end of 1994. 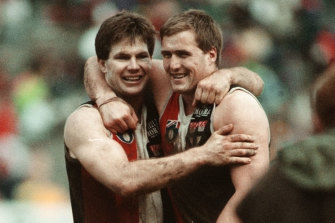 The pair was tight, with an emotional Frawley breaking down while giving a speech to induct Lockett as an official St Kilda legend in 2010.

Opening up on the impact of his long-time St Kilda teammate's passing last September, the VFL/AFL's all-time goals record-holder said Frawley's fatal car crash had given Lockett "a hell of a jolt".

"When anything happens like that, it always gives you a fair jolt," Lockett told The Age on Sunday.

"He was very close to a lot of people. Very well-liked chap. Just a very well-liked person throughout the whole of the industry. Not just football, everywhere. It does give you a hell of a jolt. It makes you realise how precious life is. It's just one of those terrible, unfortunate things. It's a shame."

Frawley lasted only 30 seconds or so when honouring Lockett on stage a decade ago.

"He's humble, he doesn't like talking about himself, he is the Don Bradman of our time … I'm sorry for getting emotional but … I've lost it, thank you," Frawley said at the time.

Meanwhile, Lockett, 54, said he and his family were holding up well in NSW's Southern Highlands amid the isolation of the coronavirus pandemic.

"Nothing changes with me," Lockett said. 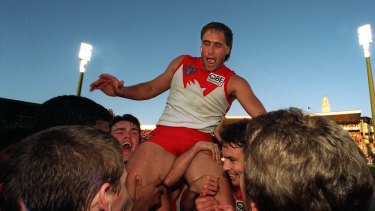 Tony Lockett is chaired off the SCG in 1996Credit:Jason South

"I just get on my pushbike. I ride most days. That eats up three or four hours of the day, do a bit of work at home and that's another day gone and we do it all the next day."

Lockett was full of praise for the AFL's handling of the coronavirus situation, which has forced the league into an indefinite hiatus.

"They've got such a massive job, [AFL chief executive] Gil [McLachlan] and all his staff and all the clubs, just huge jobs ahead of them. And from what I can gather, they're all doing a great job."

The champion full-forward briefly returned to the Swans in 2017 as a part-time forwards and goalkicking coach and while he no longer holds a formal role at an AFL club, Lockett said he was eagerly anticipating football's return.

"We'll all be glad when it is [back]. It gives you something to look forward to, doesn't it? We've just got to do the right thing. Every day that goes by is another day closer to it starting. That's the way you look at it. The glass is half-full. There's no other way to look at it."

Lockett added that the pandemic had reminded him how fortunate he was to be living in Australia.

"We knock it on the head early, we get back to playing sport and everyone gets back to normality and we'll all realise just how good we have got it in this country. It's a good time to reflect that we're a lot luckier than some of them poor buggers overseas."