After a slow start to the season, the Brisbane Lions have continued their push up the ladder with their fifth win in a row, blowing away the Gold Coast Suns by 73 points in a tepid clash at Metricon Stadium.

These games have had their share of fire and spice over the last decade, but the Suns looked listless and disorganised, especially in defence, where the Lions were allowed to take far too many uncontested marks.

The game was over by early in the third quarter, the Lions potting 14 straight from the second quarter. The lack of intensity and discipline from the Suns against their state rivals would have distressed coach Stuart Dew, with their season slipping to three wins from nine rounds. 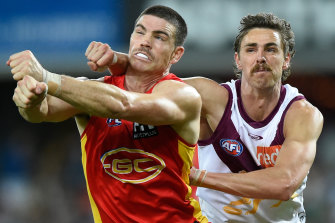 And as the quarter wore on, things really fell apart for the Suns as the Lions were more or less allowed to do as they pleased, piling on 8.1 to a solitary behind. Three of them came from free kicks, two of those including 50 metre penalties.

Yes, the Suns were missing Touk Miller, their prime mover in the midfield this year, through suspension. But the Lions are missing Brownlow medallist Lachie Neale and Jarrod Berry, too. They also lost defender Ryan Lester early in his 150th match to a hamstring injury.

The Lions have plenty of backup in the middle, though. Jarrod Lyons, whom the Suns gave up to the Lions for next to nothing, won the Marcus Ashcroft for best on ground and was indefatigable in the centre alongside captain Dayne Zorko.

In defence, Harris Andrews easily accounted for Ben King, one of the premier young forwards in the competition, and Brandon Starcevich destroyed Izak Rankine, who barely had a touch.

But it was in attack – albeit against some very sloppy defence – where the Lions cleaned up. Daniel McStay continues to thrive with four goals, Charlie Cameron another three, and Eric Hipwood, Joe Daniher and Lincoln McCarthy two each.

McCarthy, who struggled for so long with injuries while at Geelong, has quietly built a resume as one of the best defensive forwards in the competition. His game is now a fully rounded balance of brilliance and pressure acts; he is also superb overhead.

For the Suns, there was barely a spark. Perhaps only David Swallow could walk off the field with his head high for a fully whole-hearted performance. A dozen players barely made, or failed to lay a single tackle.

They are a better, more talented team than that. But it’s past time they proved it. It won’t get any easier at Geelong next week, but they need to accept that challenge and start with the honest account they failed abysmally to display here.