Brisbane Lions forward Dan McStay has told the club he will exercise his free agency rights with the 27-year-old to join Collingwood in the upcoming trade period.

McStay played 161 games and kicked 138 goals after being drafted from Victoria to the Lions as a defender with pick No.25 in the 2013 national draft.

He developed into a forward becoming an important cog in the Lions’ attack alongside other marking targets Eric Hipwood and Joe Daniher and was an outstanding contributor in the club’s two finals wins over Richmond and Melbourne this season, playing in the ruck in the elimination final after teammate Oscar McInerney was concussed.

His absence was felt in the 2021 finals series when a concussion in the qualifying final ended his season. 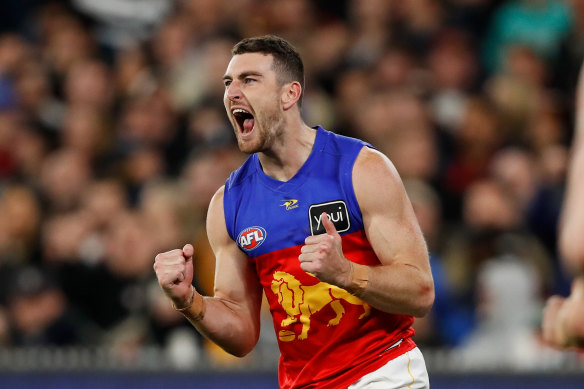 Dan McStay celebrates a goal against the Demons in the Lions’ semi-final victory.Credit:Getty Images

Lions’ football manager Danny Daly said McStay went with the club’s blessing as he had not missed a beat despite ongoing speculation about his future this year.

“Dan has been a great teammate in his time with the Lions and remained committed to our cause until the end,” Daly said.

“He stuck with the club during many lean seasons and played a vital role in helping the Brisbane Lions play finals football the past four seasons.”

McStay will add depth to the Magpies forward and defensive groups with a battered Collingwood forward Brodie Mihocek battling through the back half of the season while Collingwood lacked an extra tall defender in their preliminary final loss to Sydney.

The Magpies are working to re-sign restricted free agent Jordan De Goey and forward Oliver Henry and are also in the market for Adelaide’s Billy Frampton and the Giants’ Bobby Hill.

McStay’s decision was driven by a desire to return to Victoria to be near family and he played under Justin Leppitsch at the Lions when he first arrived at the club. Leppitsch is now an assistant coach under Craig McRae at Collingwood.

He arrives with the Magpies contending for a flag having surprised most observers with their performance in 2021 when they were eliminated in the preliminary final they lost by one point.

McStay said he enjoyed his time at the Lions but the lure of home was strong.

“I’ve had an amazing nine years with great support from both the playing group and staff,” McStay said.

“They have helped me grow both on and off the field and I’m incredibly grateful for the opportunity the Brisbane Lions have given me to fulfil my dreams of playing AFL.”