NRL halfback Lachlan Lewis’ career is in limbo after the Bulldogs tore up the remainder of his contract on Tuesday due to alleged theft of club property.

Lewis had already been informed he would not be with the club beyond the 2021 season, but was told this week his contract would be ripped up early after he allegedly tried to sell a speaker owned by the club on eBay.

The axing leaves Lewis approximately $55,000 out of pocket.

He was stood down by the club last month over the incident and missed out on the final two games of the season.

Lewis defended his actions, saying his decision to allegedly try and sell a team speaker given to the players in their Queensland hub by the club was a practical joke.

“After issuing Lachlan a breach notice and following due process regarding his response, the club has decided to part ways with Lachlan, effective immediately,” Bulldogs chief executive Aaron Warburton said. 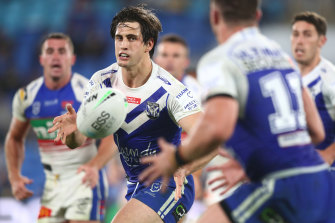 In the doghouse: Lachlan Lewis says his attempt to sell a club soundbar on eBay was a joke gone wrong.Credit:Getty

“The club is committed to supporting Lachlan during this time and we wish him all the best for the future.”

Lewis’ attempt to sell the soundbar was only foiled when a Bulldogs official followed him into a hotel car park and caught the player red-handed as he was about to hand the unused equipment to a courier.

He had listed it under his own personal eBay account as for sale for $650, or best offer, in early August, despite being on a $450,000 contract.

It was only when the Bulldogs were undergoing a stocktake of their gear to prepare for the end of the season – three weeks after Lewis had made the eBay listing – did club officials realise the NRL-bought sound bar was missing.

He was fined $10,000 by the NRL over the incident and ordered to undergo education and counselling courses.

Lewis has reportedly attracted interest from Super League but the 25-year-old is yet to find an NRL side interested in taking him on.