But there is a clear winner this week for best comment on the commentators. It was that it was no one person’s or class’s prerogative to be “the gatekeeper of truth in the industry”. 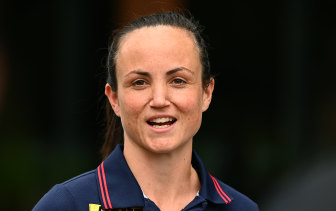 That was Daisy Pearce with Gerard Whateley on SEN. Not for the first time, she’d been thrust into an uncomfortable spotlight by a tirade directed against her from former commentator Rex Hunt, condemning the replacement of Wayne Carey with Pearce on Friday night footy.

Hunt’s rant does not bear repeating here and would not be worth reporting at all except that it opens up a window into an archaic but far from extinct mindset. 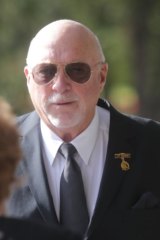 In a social media post, Dermott Brereton supported Hunt, saying that “gender quotas aside”, he preferred Carey to Pearce. Pearce said it was the first time she had been publicly set upon by colleagues and peers instead of social media trolls. This week’s twist in the paradigm was commentators critiquing a commentator.

Other than the occasional jibe by a player about the number of games a non-player has played, this is rare. For pretty much all of history, player and non-player have had, if not a number in common, a chromosome and that has guaranteed fellowship. Evidently, Pearce does not qualify for the usual indemnity.

Brereton subsequently claimed to have been misrepresented. “Daisy is a very competent commentator, but she is not Wayne Carey,” he said. “So I can understand where Rex was coming from. He just didn’t quite annunciate it in a 2020-qualified fashion.”

In fact, Hunt’s annunciation was perfectly clear, and so was his enunciation, and Brereton was at least careless to associate himself with Hunt in this way.

To be clear, this is not about the relative virtues of Pearce and Carey as commentators. It is about the small but still strong pushback against Pearce’s right to be there at all, five years down the track.

It has overtones of the official played by John Cleese at the stoning of Mathias in The Life Of Brian who looks suspiciously at the crowd and the many obviously fake beards and asks: “Are there any women here today?” 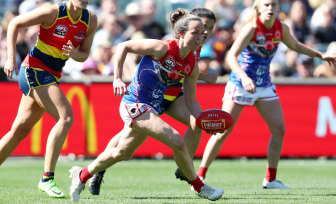 Daisy Pearce in action during the 2022 AFLW Grand Final.Credit:Getty Images

Reluctant but obliged to comment on the commentary on her as a commentator, Pearce did what a good commentator does: she distilled its essence.

She said she understood how it was for her critics to feel disoriented by her. She’d been made to feel out of time and place in their world most of her life. She’d never seen herself reflected in the telecasting of the game growing up, just as she’d never seen herself modelled on the field. Now it was they who felt ever so slightly shut out. 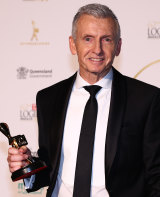 So, so slightly. Hunt in his fever suggested she was there because of “pressure to have equal genders everywhere”. Pearce is one of at most two women. Seemingly, one’s a quota, two’s a crowd. The gatekeeper legions of the old guard are still intact.

Ideally, commentators/analysts would be assessed as some writing competitions are, with no names attached. That way, it would be about what they say, not who they are. But in sportscasting, the name is the thing. Pearce, as one of few recognisable women footballers when AFLW began, has benefited from that.

But she’s proven herself at the craft. A good analyst shows you what you can’t see in a game, the hidden dimension if you like, and notes trends and anticipates changes. Pearce does. An agreeable voice is a bonus. To my mind, the best commentator in any sport right now is Ricky Ponting.

Cricket, incidentally, has a more open mind than footy. At least three women are telecasting in the Australian summers without demur. Two, egad, are not Australian, and one, egadder, isn’t even an ex-player. You know, like Bruce McAvaney and Denis Cometti.

Overwhelmingly, the gatekeepers are older men, the up-and-comers younger women. This is only to be expected: until recently, women could not bring the voice of experience to sports commentary because they were denied both the experience and the voice.

Brereton says the idea that old white Anglo men feel threatened is “flimsy”, that if you tell the truth you have nothing to fear. Which is what Pearce said.

But you only have to listen for a bit to know that it is not truth that some in the gatekeeper legions fear, but change. First no biff in the game, then lawlessness in the streets, now women in the comm box: where will it all end?

Best we finish here before it gets out that Richmond FC, erstwhile home to Hunt, has committed to an environment sustainability action plan, and Australian cricket captain Pat Cummins is leading an initiative in which his sport is looking at ways to minimise its carbon footprint – and that in some of these endeavours, women are present.