Geelong star Max Holmes is in doubt for Saturday’s AFL grand final, and is likely to be replaced by Mark O’Connor should he not pass a late fitness test.

Holmes, named to play on Thursday, did not join in the short captain’s run at lunchtime at the MCG on Friday, having completed the requirements set out by the club’s fitness staff to that point. 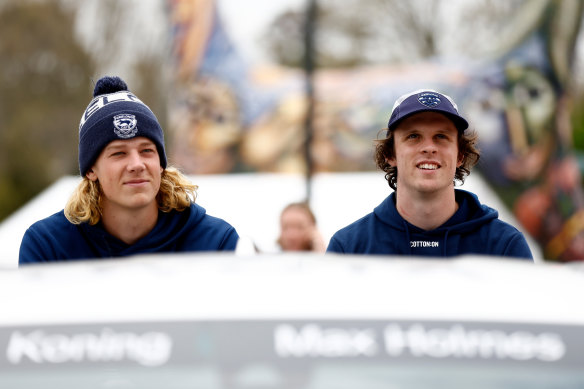 Max Holmes (right) did not train on Friday.Credit:AFL Photos

He chatted with club staff by the boundary, as teammates had a light run and completed shots on goal. However, the Cats may conduct a fitness test in private. A final call on Holmes may not be made until Saturday morning.

The dashing wingman was hurt in last Friday’s preliminary final, but he insisted through the week he will line up against the Swans. However, coach Chris Scott said on Friday that Holmes was no certainty.

“He has probably done what he needed to do … we were hoping to be at the point now that we could absolutely say that he was playing. What we do know is that it’s absolutely not a no,” Scott said.

“We just need to make sure we spend the requisite time over the next little bit working through whether he is absolutely right and whether it’s the best thing for us, but we haven’t made that decision just yet.” 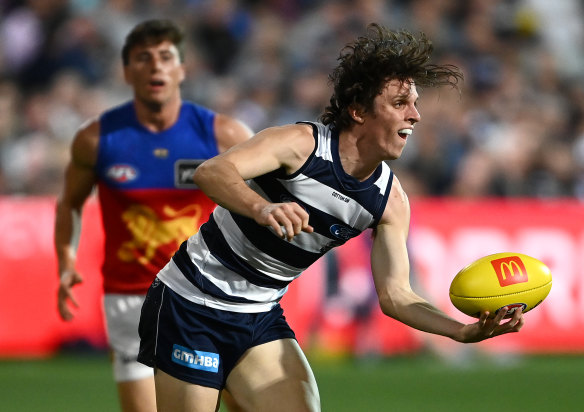 Geelong star Max Holmes has made a last-ditch bid to be selected for Saturday’s grand final.Credit:Getty Images

He was one of the Cats’ best against the Lions, having 12 touches and a goal, before hobbling off midway through the third term.

Irishman O’Connor was the medical substitute last week, with Scott declaring he “probably” would replace Holmes should a late change be made.

“There are three guys over the last couple of weeks in particular that have been desperately unlucky. Mark has been one of them, Sam Menegola is the other, and Brandan Parfitt is the other,” Scott said.

“If you had have asked me 12 weeks ago, I would have said those three guys were in our team for sure. I feel desperately for them. If Max doesn’t come up, it will be one of those guys.”

The Swans have been the league’s No.1 pressure side, but the Cats also know how to make a statement, as Patrick Dangerfield did with a stunning opening burst against the Lions. Dangerfield has done just everything in the game, outside of winning a premiership, and may have Callum Mills as his opponent on Saturday.

Scott said the Cats, complete with their revamped game plan, had few excuses if they fell short.

“This year, we go in great form, with good availability, I think our game is in really good shape. As much anytime I can remember, I think we have given ourselves every chance,” he said.

Selwood, ready for his 40th final, a league record, said the Cats head into battle “very confident” with a “nice blend” of talent. He has yet to decide whether to play on next year, but insisted whatever call is made, “we will be aligned as a footy club whatever that is”.

Cats defender Jake Kolodjashnij expects to be given the task of quelling Swans star Isaac Heeney after the mid-sized forward kicked five goals against the Cats in round two.

Kolodjashnij enters the game in good form having been outstanding in the preliminary final against the Brisbane Lions, but he knows the tough task ahead having been the unfortunate Cat attempting to stop Richmond champion Dustin Martin in the 2020 grand final.

“He’s a quality player. That is the match up most likely for me if he goes forward. Obviously, he had a really good game against us last time. If I can limit his influence as well as possible, that is going to go a long way to helping us win,” Kolodjashnij said.

The Cats are not fussed about giving the big job on Lance Franklin to young defender Sam De Koning, with Mark Blicavs saying the 20-year-old was a natural competitor who would not be overawed by the big occasion.

The All-Australian said he thought they would have a team focus in attempting to quell the Sydney midfield with the formula working against the Lions in the preliminary final.