David Klemmer ignored an instruction from coach Adam O’Brien to come from the field, then verbally abused a Knights trainer, during Sunday’s match against Canterbury, prompting the struggling club to issue the prop with a show-cause notice.

A day after a mooted late-season trade to Parramatta failed to eventuate, Klemmer was omitted from the Knights extended squad to play against the Wests Tigers.

The international enforcer has been one of the better players for the Hunter club, and questions were immediately asked about why he was dumped. Knights fans will be waking up on Wednesday morning wondering if they will see Klemmer pull on the club’s colours again.

It was suggested to the Herald earlier on Tuesday that Klemmer was being rested because he had been playing through the pain of a chest and sternum injury. The Knights released a statement on Tuesday saying Klemmer had been involved in an on-field matter during the embarrassing loss to Canterbury.

“The Newcastle Knights have issued David Klemmer with a show cause notice relating to onfield disciplinary matters in last Sunday’s match against the Canterbury Bankstown Bulldogs. No further correspondence will be entered into until the show-cause hearing process has been completed,” the Knights said.

Sources with knowledge of the situation told the Herald Klemmer ignored the coach’s instruction to be interchanged on Sunday against the Bulldogs. 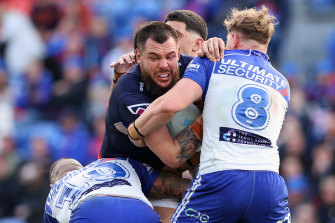 David Klemmer was issued a show-cause notice by the Knights for an on-field blow-up.Credit:Getty

When trainer Hayden Knowles pleaded with him to come from the field, a fired-up Klemmer launched into a verbal tirade. The Herald has approached Knowles and Klemmer for comment.

The relationship between O’Brien and Klemmer has reportedly been strained for some time. Klemmer enters the final year of a mega-money deal next year, and whispers the Knights were shopping him surfaced again earlier this year. O’Brien was asked about the reports of Klemmer joining the Eels earlier on Tuesday and said the matter never even reached his desk.

“It didn’t get to me, so that in itself tells probably says I don’t how much was there or what wasn’t there,” O’Brien said. “It didn’t get through to me to make any decision on. Whether it was stopped from David’s end, or it was just an inquiry. I think it’s dead and buried at the moment.”

The Knights have been in freefall with pressure mounting on O’Brien to avoid being the fourth coach sacked before the season is out.

Meanwhile, Jake Arthur returns to the halves for Parramatta with Mitchell Moses sidelined for up to a month with a broken middle finger.

The coach’s son was subjected to boos when his name was read out on the big screen a fortnight ago at CommBank Stadium, but has been backed by his teammates to handle whatever comes his way.

“He’s played there [in the halves] before, he’s a really good defender and a competitor and that’s what we love about him,” Eels hooker Reed Mahoney said.

Stephen Crichton has been named in the centres for Penrith ahead of Saturday’s clash against Canberra, but will be given until kick-off to make sure his left ear, which underwent emergency plastic surgery last week, is at no risk of splitting.