Silk, who stood down this year as chief executive the nation’s largest superannuation fund, managing assets worth $180 billion, is strongly considering nominating for one of two board positions that are up for election, along with Gowers, in a challenge to Kennett’s two preferred candidates for the board. 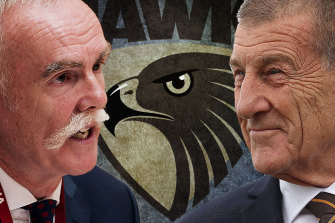 If successful, the appointment of Silk and Gowers could reduce Kennett’s stranglehold on the board. Silk has not yet lodged the nomination form, nor has Gowers.

Kennett’s preferred candidates for those two positions are incumbent Tim Shearer, a Kennett ally best known as head of fundraising for Scotch College, and ex-player Simon Taylor, a former Crownbet executive who has been nurtured by Kennett through the club’s young executive.

Kennett, who has the backing of the majority of his nine-member board and has two years to run on his term, looked for Taylor to fill the vacancy created by the imminent exit of Radek Sali, the wealthy former CEO of vitamin company Swisse.

Silk and Gowers are being endorsed by a group of well-connected but independent Hawthorn supporters, who want to loosen on Kennett’s grip on the board and football club.

But the group is in full support of the appointment of Sam Mitchell as senior coach, despite misgivings about the way the handover from Alastair Clarkson was handled in September, when Clarkson agreed to step down 12 months ahead of his replacement by Mitchell and the club was obliged to pay out the $900,000 balance of his contract.

Nominations for board positions close on October 21, with the Hawthorn annual general meeting scheduled for December 14. All Hawthorn “ordinary members” – the bulk of the adult membership – have the right to vote.

Gowers, a premiership player in 1991, served as football director on the board from 2013 until 2017, including the 2014 and 2015 premierships, replacing influential club great Jason Dunstall, before Gowers was replaced by ex-skipper Richie Vandenberg.

The supporters backing Silk and Gowers have opted not to spill the board, the threat facing Collingwood’s messy post-Eddie McGuire period, but instead support candidates taking the two spots, without putting Hawthorn’s board through the same turmoil as Collingwood.

Mark Hawthorne, the spokesman for the group pushing the board challenge, “Hawks for change,” said: “We respect what Jeff Kennett has done for the Hawthorn Football Club, but after four years of his second presidency we are no longer close to finding his successor and could not be further from a premiership.

“At the same time, we need to rebuild our relationships with the AFL, the state government and many of our past players,

“It’s for this reason we support board renewal at Hawthorn.″⁣

Kennett has announced that the board wishes to appoint ex-ruckman Taylor, who unluckily missed the 2008 premiership, on the board to fill the vacancy. Thus, the only current director who faces a contest is Shearer.

Hawthorn sources say Kennett can count on the support of at least five of his board and has no intention of being pressured into stepping down before his term ends, at the end of 2023.

AFL trades 2021: Stay across the moves, news and what it all means as our Real Footy newsletter goes daily for trade period. Sign up to get it here.