Sydney junior rugby league clubs have praised the NRL’s crackdown on high shots for giving them a competitive edge over “safer” junior codes such as soccer, as Andrew Abdo defended the move on Sunday following criticism from pundits.

Speaking on the Sunday Footy Show, the NRL chief executive said he would not apologise for trying to make the game safer for players and believed it would allow the sport to remain competitive when it came to local participation. 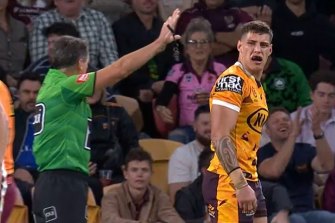 A record number of players have been sent to the sin bin during Magic Round.Credit:Fox Sports screengrab

“Parents make those decisions to say, ’My kid is not going to play rugby league,” Weldon said. “As much as things like this cause a bit of upheaval by some of the older footballers saying, ‘This is not rugby league’, the game is evolving … and the issues around concussion have got to be front of mind.”

“The saying is correct when they say it does filter down,” Waugh said. “This is who the kids look up to. It’s what they watch Friday and Saturday night.

“If the top end of town are doing things to make the game safer, it’s going to filter down and it provides us with that argument that we are just as safe as soccer and we are doing everything we can to protect the safety of young players.”

On Saturday, Roosters coach Trent Robinson called on critics of the crackdown to see the big picture and backed the direction NRL was taking. South Sydney coach Wayne Bennett also agreed with the crackdown but took issue with the increased stoppages.

Abdo labelled the welfare edict a “moment in time” for the game and said the teams which adapted the quickest would gain a competitive advantage.

“In sport, you can either administer or you can lead. The Commission is clearly taking our leadership position here and it’s our job to make sure we implement that,” he said.

“Anecdotally, I think everyone supports the stance we are taking. When your team loses it’s upsetting and it’s easy to look for reasons to account for that … but I think the fans accept what we are doing and are supportive of it.”