Latrell Mitchell is grateful that South Sydney are playing the long game with him.

Rather than rushing him back the moment the medical team gave his troublesome hamstrings the all-clear, the Rabbitohs flew Mitchell all the way to Philadelphia to spend time with “reconditioning specialist” Bill Knowles, the man who has helped the likes of Tiger Woods, Alex Rodriguez, Andy Murray, Peyton Manning and Jonny Wilkinson rehabilitate from their injuries.

The trip was a long-term investment, estimated to have cost the club about $70,000, in Mitchell at a time when it could have succumbed to pressure to immediately get its marquee man onto the field. Which is why the premiership-winning fullback is so keen to repay the “Pride of the League”.

“They have shown a lot of patience in me, a lot of perseverance,” Mitchell told the Herald. “I’m definitely keen to get back and repay that.

“It’s been a crazy journey, but South Sydney have been such a wonderful club for me. I really cherish the things they’ve done and I want to pay it forward. I want to get back and play, I’m really keen.”

Mitchell will get that opportunity when he makes his long-awaited comeback against Parramatta at Accor Stadium on July 2. There were hopes the 25 year old could have been back sooner, potentially in time to be available for selection in State of Origin II. However, a bout of Covid has delayed his return. 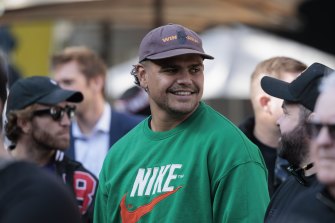 Latrell Mitchell at a promo for the upcoming Battle of the Brothers – the younger brothers of world title contender Tim Tszyu and former world champion Jeff Horn.Credit:SMH

“Twelve weeks of watching footy, it’s ridiculous,” Mitchell said. “I feel helpless not being able to help my mates out. It’s probably a glimmering light [the Covid timing]; rather than play for three weeks of good footy and then go down for a week with it and then take two weeks to get back on board, this is a positive.”

Mitchell spent two weeks with Knowles, who put the fullback through a series of games, drills and exercises to study his movement patterns and detect any areas of concern. Mitchell left with a new-found confidence in his body and a prehab program he believes will reduce the chances of further stints on the sidelines.

“He’s a cool cat, he just does things that no one else does,” Mitchell said of Knowles. “It works for him and it works for me. Personally, I’ve grown as an athlete and a trainer as well. I’m really excited to keep the stuff that I’ve learnt and keep working on that, implementing that into the way I play the game.

“Some of the things are beneficial and it’s just about practising them now and putting them towards the craft I have.”

Mitchell’s training day now begins about an hour before that of his teammates, time he uses to go through an “individualised routine” of stretches and drills.

“I get there early, I’m pretty much the first one there,” Mitchell said at a promotion for the Battle of the Brothers, a boxing showdown between the siblings of world title contender Tim Tszyu and former world champion Jeff Horn.

“I need to make sure I’m doing my mobility stretching and all of my strength stuff to prepare myself for the day of training. That’s the challenge now, to keep all the stuff I learnt and break that injury barrier. I reckon I’m on the verge of doing that.

“We’ve got really good medical staff and great people in my life who have helped me along the way.”

Asked if the knowledge garnered from his overseas trip will make him a better footballer, Mitchell said: “I don’t know, I haven’t played in 12 weeks. It’s exciting to see how I put all this stuff I’m doing at training into my game. I’m definitely keen to see me pay it forward.”

Mitchell hasn’t been idle while on the sidelines. The former Rooster has launched a clothing brand, Winmarra, a chance to get in touch with his entrepreneurial side.

“It’s connected to a significant meaning,” Mitchell said of the brand. “For me, it’s about getting back home to Taree, that’s my connection. That’s the feeling around this brand, feeling connected to what you believe in.

Watch the State of Origin exclusively live and free on Channel 9 and 9Now.