Star Sharks signing Nicho Hynes has bristled at critics who said he won’t improve after leaving NRL powerhouse Melbourne, making it his mission to drag Cronulla back into the finals.

On his first day of training under new Cronulla coach Craig Fitzgibbon, the 25-year-old discussed the lure of playing under the former Roosters assistant and his embarrassment in having a hand in ending the Sharks’ long finals run.

But his most cutting remarks were saved for proponents of the theory ex-Storm players are a shadow of their former selves after leaving Craig Bellamy, claiming there was no reason he couldn’t elevate his game to a new level after a breakout 2021.

“There’s obviously a lot of noise about people leaving the Storm and going to other clubs if they don’t go as well, but I think that’s all pretty crap to be honest,” Hynes said. “If you put the work in, I can’t see why you can’t be as good as what you were at the Storm. I just don’t think it’s an appropriate thing to say.

“‘Bellza’ gets the best out of you at the Storm, but why can’t other coaches? If you put the work in, it doesn’t matter what happens.

“I don’t know if I have a point to prove to anyone other than myself. There’s going to be outside noise and plenty of it this year. 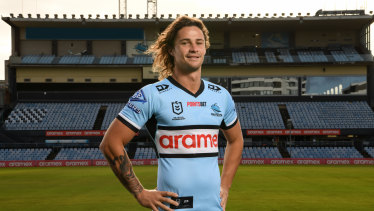 “Me going to the Sharks in the halves where I haven’t really played a whole lot of in the NRL is going to get people talking. If I put the hard work in and the training in, hopefully I can prove them all wrong.”

Hynes’ return to training came earlier than initially expected, and he will be joined by former Storm teammate Dale Finucane in coming weeks.

He was courted by a number of the Sharks’ NRL rivals – most notably the Broncos – before talks with Fitzgibbon convinced him a move to the Shire was best for his career.

Bellamy and Melbourne general manager Frank Ponissi both gave Hynes their blessing when he said he wanted to work under Fitzgibbon.

Fitzgibbon hasn’t decided on whether Hynes will wear the No.6 or No.7 in the Sharks’ opening round clash against the Raiders. The Central Coast junior also starred at fullback for the Storm in the absence of Ryan Papenhuyzen (concussion) last season.

“I grew up playing in the halves my whole life,” Hynes said. “It’s not new to me at all. People might think that, but I only played fullback when I was at the Storm. It was pretty exciting [Fitzgibbon] wanted me to play in the halves.

“He’s obviously come from a good system at the Roosters, similar to what we had at the Storm. He wanted to create a culture here, and the winning culture he wanted to bring is something I felt like I wanted to be a part of.

“If I was going to go somewhere, I wanted to go to a place which was going to make me as good as what I was [at Melbourne] and I feel like [Cronulla is] going to be a club similar to what I was at.”

Hynes admitted he considered resting from Melbourne’s final-round win over the Sharks in 2021, which ended Cronulla’s six-year run of featuring in the play-offs. But he opted to play and insisted the result would be motivation for both him and new teammates.

“It’s going to make them hungrier for more and makes me hungrier to get them there,” Hynes said. “It’s exciting times here at this club.”