Parramatta flyer Maika Sivo denied he had stayed down to milk penalties and said Cooper Johns' alleged crusher tackle on Thursday night had left him with a sore neck.

"I'm still feeling my neck now and it's sore,'' Sivo told the Herald. "It was a crusher. I stayed down because my neck was sore. There was pressure on my head. I need to ice it up. I'll be fine for next week.'' 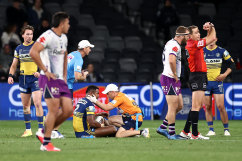 "Whether they are [crushers] or not, if you get people turning in tackles … nobody goes out to consciously to do a crusher tackle on the opposition. With all due respect, there was one on our blokes that didn't get picked up. Our bloke got up and played the ball.''

That player was Tom Eisenhuth, who was tackled by Parramatta's Marata Niukore. The Cook Islands international was the only player charged by the match review committee with a crusher tackle and is now facing a one-match ban with an early plea.

Parramatta's Brown was accused of milking a penalty when tackled by Wests Tigers debutant Shawn Blore a month ago. He bounced to his feet straight after the tackle and took the first hit-up straight at Blore.

Tigers coach Michael Maguire was unimpressed and told the Herald at the time: “We don’t want that sort of stuff in our game.” 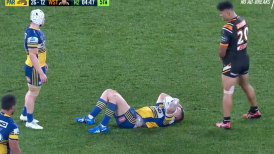 Nathan Brown lies on the ground during Parramatta’s clash with the Wests Tigers.Credit:FoxSports

The NRL are not in favour of mandatory assessments because, according to NRL head of football Graham Annesley, 'it will only open the door to abuse of the interchange rule''.

"In general, players have an ethical responsibility not to abuse rules put in place to protect them from injury,'' Annesley said on Friday.

"Suggestions of having players spend mandatory periods of time off the field if they claim they are injured from these types of tackles will only open the door to abuse of the interchange rule.

"The bottom line is, players always have a duty to accept personal responsibility for their actions as their own integrity and credibility is at stake.''

Referees can not take any risks with players staying down for fear there is a serious neck injury.

Storm players argued with referee Ben Cummins on Thursday about the Eels pair staying down, only for him to be overheard saying, "I'm not a doctor''.