Greater Western Sydney captain Stephen Coniglio concedes he spread himself too thin during his debut season as captain, as the dramatic circumstances of his sensational axing were laid bare by the latest warts and all documentary into Australian sport.

The Giants’ bombshell move shocked the football world though the writing was on the wall for Coniglio the previous week when coach Leon Cameron could barely conceal his frustrations with his out-of-form first-season skipper.

Viewers of Amazon Prime’s seven-part series, Making Their Mark, detailing the extraordinary 2020 season, are taken behind the scenes to the moment Cameron broke the news to a stunned Coniglio.

It came during a tumultuous week for the Giants, who had also announced internally a round of redundancies in the football department.

Coniglio’s form had been on the wane for several weeks, so too the Giants, who had suffered a shock loss the previous round to wooden-spooner Adelaide. Unhappy with Coniglio’s performance, Cameron delivered his captain a rev up during the game.

“You’re flat-footed, get on your heels, start winning this hunt,” Cameron said. 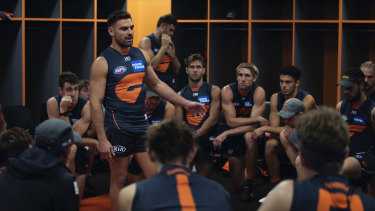 Though there was a common acceptance among experts the star midfielder’s form was down, there was widespread criticism to Coniglio’s omission as captains generally are not dropped. The foundation Giant was the first full-time skipper to be dumped in 22 years.

In an indication of his discomfort, Cameron said breaking the news to Coniglio was more difficult than telling a member of his coaching staff they no longer had a job.

“Today’s even tougher mate, I’m not going to play you his week,” Cameron tells a stunned Coniglio, whose lips are quivering.

“We had a good discussion with match committee, you’re just out of form.

“I don’t take that lightly. This is a really, really hard decision. Really hard one. But mate, just the output at the moment is just not there.

“So absorbing this conversation and me delivering it to you is pretty bloody God-damn hard. And we’re going into a cut throat game this week. But I have to make this decision, Cogs.

“The cold hard facts internally: out of form, need to get back in form and lead the charge. That’s what I need from you.”

A shattered Coniglio is consoled by veteran teammate Heath Shaw, who voices his disagreement with the decision to Cameron. He later breaks down explaining his close relationship with Shaw, whom he describes as a “special teammate”.

Shaw had earlier told Coniglio over a glass of red that he had “lost the edge” by not concentrating enough on his own performance, an assessment the captain agreed with.

“That’s the scene I reflect really well. For me, the person I am, if there are issues I like to take it on myself and work through them,” Coniglio told the Herald and The Age on Tuesday.

“There were some things that could have been delegated better, that was one of the learnings from last year.

“Just in general, I over-thought things at times. Footy can be such a simple but complicated game at times. I over-complicated a lot of things last year.

“I found at times I took on a little bit too much and thinking and trying to solve things that were going on. That’s one example of being captain that I’m out there and performing at a consistent level and that being a No.1 priority.”