Leon Cameron predicted there would be a response from Greater Western Sydney after their limp, lifeless loss to Fremantle. It came as forecast on Sunday – but the four points did not, as a fresh spate of injuries darkened an already grim season.

The Giants seemed to have vengeance on their minds against Melbourne, asserting themselves with a watered-down version of the wanton physicality that propelled them to an AFL grand final two years ago. 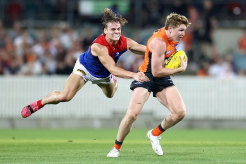 Tom Green of the Giants is tackled by Trent Rivers. Credit:Getty Images

It was enough to put them in the game at Manuka Oval in Canberra. But then injury claimed defensive lynchpin Phil Davis and captain Stephen Coniglio within minutes of each other in the second quarter, before Matt de Boer went down early in the third – leaving them two men short on the bench for almost half the match and making the availability of a medical sub, Nick Shipley, a bit like putting a band-aid on an axe wound.

Davis seemed to tweak something in his calf while trailing a leading Luke Jackson, signalling to the bench straight away that he was in trouble. Coniglio got his ankle caught underneath him as he was tackled by Tom Sparrow and was carried from the field in wincing pain, re-emerging later on the bench in a moon-boot and on crutches.

Then de Boer, who had been tagging Clayton Oliver and kept him to just a handful of touches in the first half, followed them down the race with a hamstring issue, which ended his night early too.

The full extent of the injuries will reveal itself during the week, but Cameron is expecting to lose all three for at least a couple of weeks. “Clearly, to have three of our leadership group go down halfway through the game was disappointing,” he said. “But it is what it is. For three and a half quarters we were really good. Did fatigue get us in the end? I’d hate to think not. We played a tough brand of footy but just ran out of legs at the end.”

It was GWS’s third defeat in a row, making this their worst start to a season since 2013 – their second year in the AFL. They weren’t the pushovers they were against Fremantle, at least, but that is a very low bar to clear for a team so talented. The effort was clearly there and the intensity never dropped, but not even a miracle could get them into the finals mix at this point, given the extent of their injury crisis.

“We’ll walk away with some really good stuff – proud of our intensity, but we’re not here to put our hand up and say ‘woe is me, we’ve got a fair few injuries’. That’s life. You dig in when it happens,” Cameron said. “We’ll lick our wounds but equally, we’re not going to be despondent from the effort.”

Melbourne – now 3-0 for the first time since 2005 – kicked the first goal of the game with an angled dribbler from Alex Neal-Bullen, but conceded four of the next five to trail by 16 points at the first change as GWS asserted themselves.

But inevitably, the weight of numbers told, as the Demons booted eight goals to three in the middle quarters. Once they hit the lead, that was basically that.

Toby Greene finished with five goals, two of which came at the start of the final term as GWS closed back to within one straight kick – threatening a comeback they never had the legs to execute, and one that the Dees quickly snuffed out.

At the other end, Kysaiah Pickett was electric, bagging 4.1 from 13 disposals to go with seven score involvements, while captain Max Gawn (24 touches, two goals, nine marks, eight clearances) was indomitable in the ruck and around the ground.

“He’s exciting,” coach Simon Goodwin said of Pickett. “He’s just a kid that wants to learn, he wants to improve, he wants to get better and he’s built some really strong habits since the time he’s joined the footy club. Our supporters are going to learn to love Kossie, as we do as coaches and players, but he’s only going to get better. He was a real highlight tonight.”