On Monday, NRL boss Graham Annesley admitted the call to sin bin Tevaga after a run-in with Eels player Nathan Brown was incorrect. 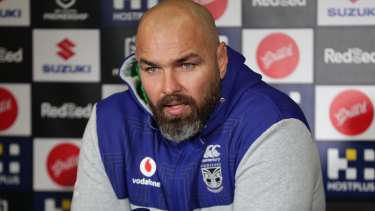 "I just have the feeling that if it's us it's forgotten about pretty quickly."

On Monday, Annesley said while the sin-bin decision was wrong he believed the Warriors lock still needed to take responsibility for the jersey grab against Brown, but Payten did not agree.

"If it is one of our players and they continual make mistakes or mistakes in crucial parts of the game under pressure and it's a consistent thing where it happens week upon week, then we don't pick him," Payten said. "I think that's the accountability they [the referees] should hold from their end."

The Warriors are up against the eight-placed Sharks on Sunday in a must-win for New Zealand. The Warriors currently sit in 10th place with a win needed to stay in finals contention.

"Everyone is well aware of where we are at and how important the game is," he said. "It will have a finals-type atmosphere I am sure."

The Warriors are set to be in with a chance, with the Sharks without skipper Wade Graham and star Chad Townsend who are both under suspension for judiciary offences.