Eddie Betts says he felt his voice had not been heard when the AFL failed to act after he relayed the traumatic experience he and several teammates endured at Adelaide’s pre-season camp on the Gold Coast in 2018.

The former Crows and Carlton champion said he decided to share his experience on the camp in his book, The Boy from Boomerang Crescent, as part of a healing process that he and several teammates needed to undergo as a result of the camp. 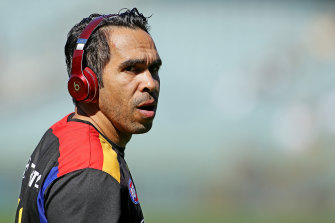 Eddie Betts was a star at the Crows kicking 310 goals in 132 gamesCredit:Getty

The 35-year-old, who played 350 AFL games, said he was hurt when the AFL found after its investigation in 2018 that the Crows had not breached any rules but needed to take more care in the future, as he wanted to create a safer space for players entering the competition.

“I felt like my voice wasn’t being heard and I felt like I needed justice and it did hurt at first when nothing was done,” Betts told Fox Footy on Wednesday night.

Betts received an apology from Adelaide CEO Tim Silvers on Wednesday for the pain the camp caused him. Silvers also offered an apology to any other Crows players affected by what took place. The AFL and SafeWork SA said on Wednesday there was no need to re-investigate the issue, however, the AFLPA wants to speak to players who were at the Crows in 2018.

The former star forward, who was one of the game’s most exciting players, said he had accepted the apology and he held no animosity towards the Crows. In fact, he said part of him “felt sick” about writing the truth because he knew many people who were his friends would need to again deal with the fallout.

“I love that football club and the players there … I know a lot of players did feel hurt and still are hurting and hopefully they can get some comfort from that apology and finally try to move forward.”

Betts was part of “group one” at the camp and said players in other groups still didn’t know of the others’ full experiences.

Betts said private information he had provided was used in an activity in which abuse hurled at him, an exercise the players were told would strengthen them mentally.

“We didn’t need outside people to come in to make us mentally tough,” Betts said, referencing how the team had come back to play football after the death of their coach Phil Walsh in 2015. “We were already a strong, great environment and a team that really cared for one another.”