Sydney co-captain Luke Parker has put an end to mounting speculation about his future, signing a new four-year contract that all but guarantees he will play for the Swans for the remainder of his career.

Parker was last week awarded the Bob Skilton Medal as Sydney’s club champion for the third time in recognition of another stellar season, in which he played every match for the red and white as they returned to the AFL finals after a two-year absence. 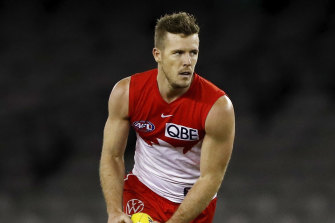 Luke Parker has signed a new four-year deal with the Swans.Credit:Getty

But the 28-year-old’s prolonged stand-off with the Swans over the value and length of a new deal had put rival clubs on notice, and even prompted suggestions in some quarters that the unrestricted free agent could be targeted by Brisbane as a replacement for wantaway star Lachie Neale.

Parker appears to have gotten what he wanted, penning a long-term contract extension that expires at the end of 2025, when the midfielder will be almost 33 – while the Swans will be pleased to have successfully locked away one of their most important players as they aim to improve on this year’s sixth-placed finish.

“I absolutely love the club and I wanted to be part of the long term and really drive the group through this next period,” Parker said.

“I’m really excited about what the future looks like. We have a great group and we have taken some big steps forward this year.

“The group we’ve got coming through is so exciting. We’ve got some young guys who are just starting out in their careers and you ride the bumps with them, you ride the exciting times with them, and it’s such good fun.”

Parker has played 235 games – including 19 finals – for the Swans since being drafted with pick 40 at the 2010 draft, and was made co-captain alongside Josh Kennedy and Dane Rampe in 2019.

He has ranked in the top 10 of Sydney’s best and fairest count for the last nine years running, and has placed inside the top three in the last five.

“I know all of the Swans community, including players, staff and our members, will be thrilled to have Luke commit to the club,” said Swans head of football Charlie Gardiner.

“Luke has been one of the players setting the standards for our group for a long time now.

“He leads by example, on and off the field and has been a wonderful mentor to many of our younger players.

“He was an outstanding contributor for us in 2021 and we are confident in his ability to drive our group forward for the next four seasons.”

The Swans will now turn their attention towards re-signing a host of other off-contract players, including utility Jordan Dawson and young midfielder Dylan Stephens, while managing a tight salary cap situation.