Isabel Huntington, the current No. 1 contested marker and the Bulldogs’ leading goalkicker, has gone down with a suspected ACL injury in the club’s 24-point loss to Melbourne on Saturday night.

It is another bitter blow for Huntington, who has overcome a broken leg and anterior cruciate ligament injuries in her left and right knees to become one of the AFLW’s top players. 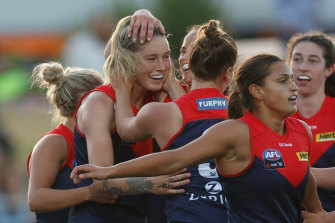 Tayla Harris is surrounded by her Demons teammates after scoring.Credit:Getty Images

The former top draft pick and All-Australian defender ruptured her right ACL in 2018, ending her debut season, the same one in question on Saturday night.

Since recovering from those earlier injuries, she had cemented her place in the AFLW’s top tier, winning both the Bulldogs’ best and fairest medal and NAB AFLW Rising Star award in 2020.

She went down after twisting in a contest, and was on crutches at game’s end.

Casey Sherriff and Maddison Gay got the Demons off to a flying start, with Eden Zanker continuing their clean play, as the Dogs notched just one behind by the first break.

With the omission of Katie Lynch and Ellyse Gamble, young Bulldog Eleanor Brown found herself up against star player Tayla Harris, making her debut for the Demons. Unsurprisingly, she struggled to see much of the ball early on but managed six disposals by the final siren.

Huntington booted a goal before suffering the knee injury late in the first term. 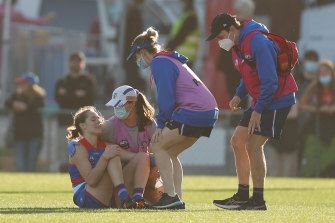 A shaken Bulldogs side then struggled to focus, failing to add to Huntington’s goal in the second, as the Demons edged further ahead thanks to a major from Kate Hore as they dominated their inside 50.

Skipper Ellie Blackburn was strongest for the Bulldogs heading into the main break, with 12 disposals, while former Bulldog Libby Birch led the Demons with seven kicks, three handballs and two marks as they took a 23-point lead.

It was a seemingly different Bulldogs side in the second half, with Bonnie Toogood gettting the side back on the board, closely followed by a captain’s goal from Blackburn.

Harris announced her arrival at the Demons as the decorated former Blue slotted a goal heading into the final break, the Demons still leading the inside-50s.

In a congested final quarter, Hore sealed the deal for Melbourne in the dying moments.

Melbourne skipper Daisy Pearce said: “We were pretty happy with our execution in the contest. We had a few ins and outs with injuries and illness but this year it’s going to take your entire squad and then some, so you’ll probably see changing faces but the 21 that went out there today did a great job.″⁣

HARRIS HAILS FROM IKON PARK
Tayla Harris pulled on the red and blue for the first time, with the key forward part of a three-way deal with GWS and Carlton. Harris arrives with 37 games and 29 goals to her name.

Harris said post-game: “There’s been a fair bit going on but it doesn’t matter, it’s irrelevant – I’m just doing my bit and all I ever wanted to do was just contribute. I get the affirmation from my teammates and that’s all I ever need. The way we came out was a real testament to our hard work in the pre-season and I can’t wait to get back out there next week.”

Kangaroos fight back to down Geelong in opener

North Melbourne came from behind to edge out the Cats by eight points in a rematch of last year’s season-opener on Saturday.

It was a far cry from the 62-point loss the Cats suffered last time the sides met but even with a new-look cohort and an eight-point lead in the third term, they were unable to hold off the Kangaroos. 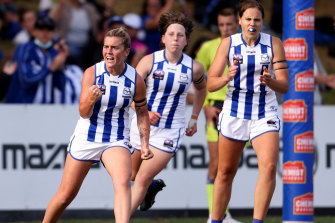 Daisy Bateman celebrates a goal for the Kangaroos.Credit:Getty Images

The Cats also had the long-awaited return of explosive midfielder Nina Morrison on their side, returning from her second ACL injury in as many years.

North Melbourne were without skipper and five-time All-Australian Emma Kearney as she recovers from COVID-19 but debuted four recruits in Amy Smith and former Bulldog Kim Rennie, as well as draftees Tess Craven and Jasmine Ferguson.

It was a goalless first term before Jenna Bruton earned the Kangaroos a free kick and converted in the final minute, remaining the only goal-scorer for the first half.

In a high-pressure defensive contest, the Kangaroos had 55 contested possessions to Geelong’s 48, with each side managing repeat entries into the forward 50 but unable to convert.

All-Australian Kangaroo Ash Riddell dominated with 18 disposals. She had 35 by the final siren, and was assisted by Kaitlyn Ashmore as they tried to fill the void left by their skipper.

Heading into the second half, Geelong’s Amy McDonald had 12 disposals and 11 handballs, but it was Morrison and Georgie Prespakis who managed to live up to the hype surrounding them in recent weeks.

The Cats came out with a quick goal in the third through experienced forward Phoebe McWilliams. It was salt in the wound for the Kangaroos as Ashmore hobbled to the sidelines visibly in pain.

Cat Julia Crockett-Grills added another soon after, as Geelong dominated time in the forward half, however premiership player Scheer was sidelined for a concussion test.

Daisy Bateman then out-ran a tiring Geelong defence to leave the Kangaroos within two points at the final break, with things also looking up as Ashmore returned to play.

North’s Jasmine Garner and Emma King helped Mia King to a major in the fourth, closely followed by one off the boot of Ashmore.

Geelong skipper Meg McDonald was on the sidelines in a world of pain as the final siren went, while debutant Kangaroo Rennie also exited with a head knock.

POWERFUL PRESPAKIS
All eyes were on 2021 No. 2 draft pick Georgie Prespakis, who didn’t disappoint with the first clearance of the game, ending with 20 disposals and four handballs. The two-time NAB League best and fairest is the younger sister of Carlton’s midfielder Maddy, an All-Australian and 2020 league best and fairest.

HISTORY FOR ROOS
Debutant Amy Smith ran out as the Kangaroos’ first father-daughter recruit. Former Kangaroo and Demon Shaun Smith has passed the baton on to two of his offspring, with Amy’s brother Joel also AFL listed with Melbourne. Formerly a basketballer, 170-centimetre Amy only took up football seriously two years ago, winning a senior premiership in the Essendon District league with Aberfeldie.

Richmond have booted 10 goals to overpower St Kilda in the first AFLW game of the season at Skybus Stadium, Frankston.

After failing to win a game in their maiden season of 2020, Ryan Ferguson’s new-look Tigers, with just 16 of the 30 inaugural players, powered to a 38-point win on Friday night. 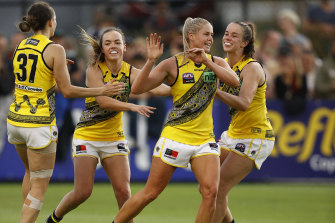 Katie Brennan celebrates a goal for the Tigers.Credit:Getty Images

Both sides booted two goals in the first term, a promising start given that the last time the teams met Richmond were kept to just three points in St Kilda’s 39-point victory.

Farmer and mother Courtney Wakefield continued the Tigers’ momentum into the second quarter, booting her first of two for the night. Sarah Darcy and Jess Hosking were the strength in defence for Richmond and, despite repeat entries, the Saints couldn’t convert leading into the main break.

The Tigers led by nine points at half-time, with All-Australian Monique Conti notching 13 disposals and two inside 50s, while counterpart Tilly Lucas-Rodd clocked 12 disposals for the Saints. 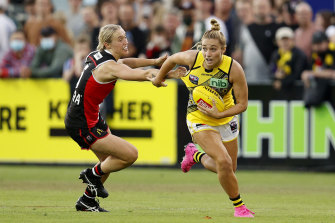 Dal Santo urged his side to “be brave” at the final break, notably moving former Tiger Alana Woodward to tag Conti.

Bernardi scored her second, so too did Megan Kiely as the Saints became visibly frustrated with a margin of 38 and Lucas-Rodd limped to the sidelines, joining Richmond’s Poppy Kelly with a taped right knee.

Having not scored a goal since the first term, the Saints slotted one in the dying seconds off the boot of Jess Matin, but it was cold comfort in a clinical Richmond performance.

FAMILY TIES
Tigers recruiters successfully secured the second half of the Hosking duo, with Jess joining her identical twin sister Sarah from Carlton in a last-minute trade, and the Peninsula locals were reunited on their home turf. The pair weren’t the only ones with a family night out, as two-time premiership Tiger Tom Lynch presented his younger sister Beth with her guernsey before she debuted in the yellow and black. Lynch, who played eight games for North Melbourne across three seasons, was elevated to their primary list just last week, following the movement of Iilish Ross to the club’s inactive list. 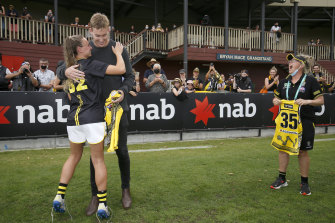 Tom Lynch presents sister Beth with her jumper before the game.Credit:Getty Images

CONTI DOUBLES STAR POWER
Star Tiger Monique Conti was the No. 1 ball winner for the game, with 29 disposals and eight clearances. Normally juggling pre-season commitments with the WNBL, the 22-year-old has just completed her first full pre-season heading into her fifth season. Her round-one performance was a forewarning to other midfielders in the competition.