Rugby bosses are still burying their heads in the sand over the sport’s links to degenerative brain injuries, according to the youngest former player yet to join marquee legal action against governing bodies.

Adam Hughes, who retired two years ago after a succession of concussions, is now just 30 but has two major trauma scars on his brain.

He is one of six new players who now are supporting legal action against World Rugby, the Rugby Football Union and Welsh Rugby Union. On Thursday, the legal team behind the case sent a Letter of Claim to those bodies. 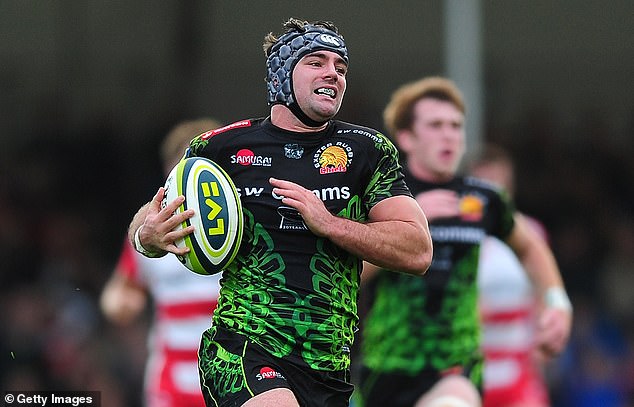 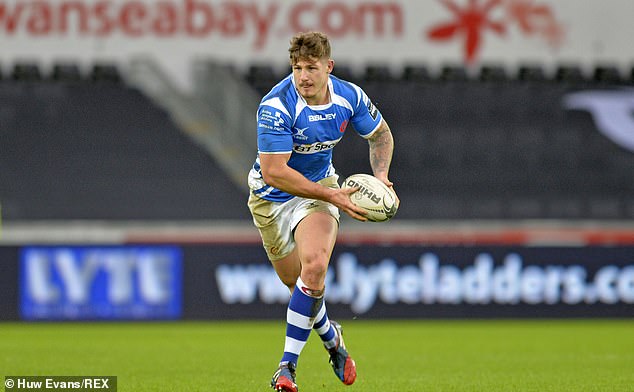 While Welshman Hughes does not yet have early-onset dementia he has been warned he might be on the same path as the trio in their 40s who have already gone public – Steve Thompson, Alix Popham and Michael Lipman.

The former centre heard RFU chief executive Bill Sweeney say last week that there was no proven link between concussion and Chronic Traumatic Encephalopathy (CTE) – a degenerative brain disease linked to repeated blows to the head which was found in 110 of 111 American Football players in 2017 a post-mortem study.

He was left frustrated. 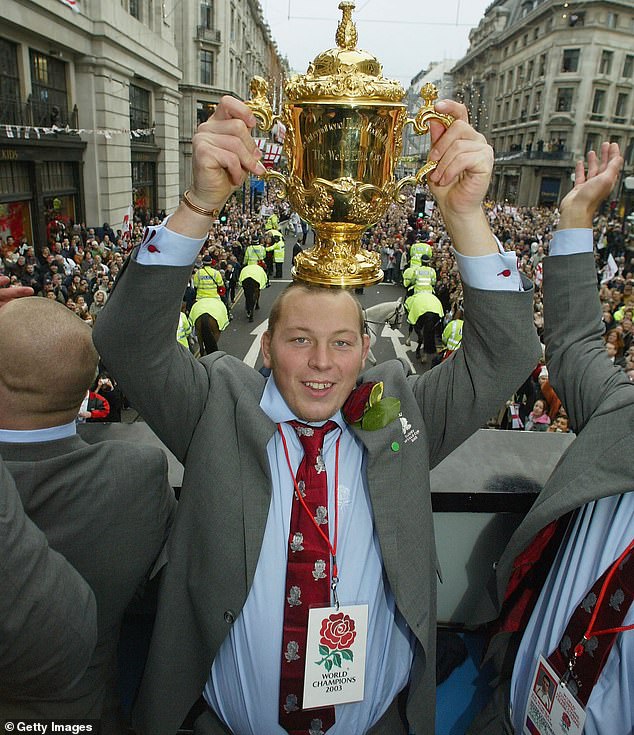 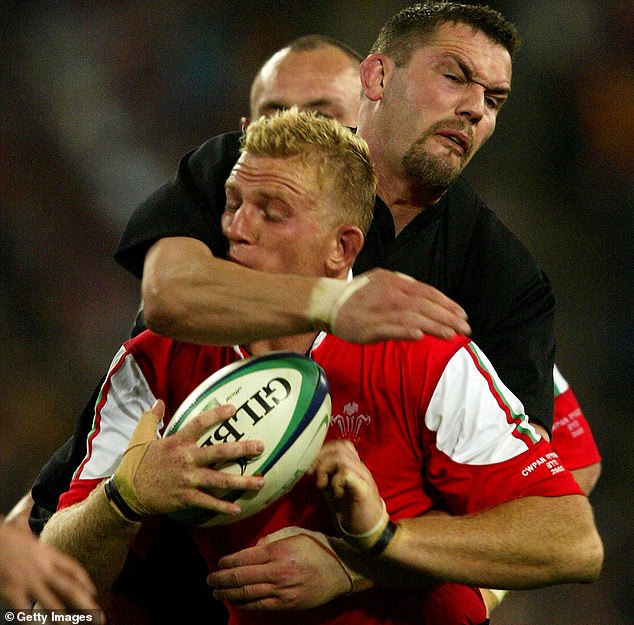 ‘With attitudes like – “it’s not 100 per cent” – that leads to situation that the worst case scenario has to happen before something changes,’ Hughes, who played for Wales Under-20s, Exeter Chiefs and the Dragons told Sportsmail.

‘It’s better not to delay, face the facts, listen to stories of these players and take action to put the game in a better place rather than waiting until the worst happens, then making changes.’

Hughes’ problems started at the Dragons as a teenager. With each blow he took longer to recover. 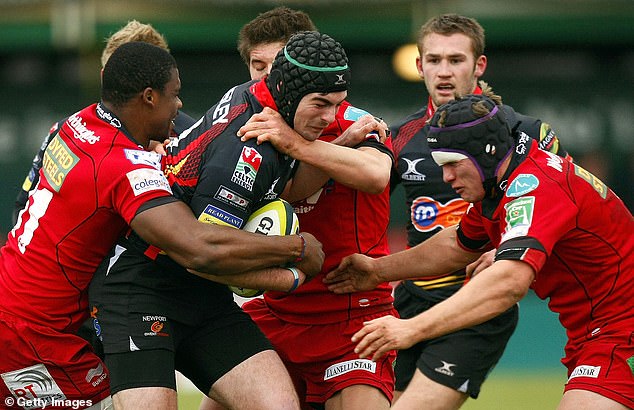 The worst one came when playing the LV Cup final for Exeter at Franklin’s Gardens against Maro Itoje’s Saracens in 2015.

‘I took a blow, and I’ve no recollection of the day whatsoever,’ he said. ‘I remember feeling like I’d opened my eyes in the stand – I said “why am I here and not on the pitch?”

‘I asked Rob Baxter to explain the week after what happened. He said I came into the changing room at half-time, broke down and there was no way he’d put me back on the pitch. To not remember things like that is really scary.’ 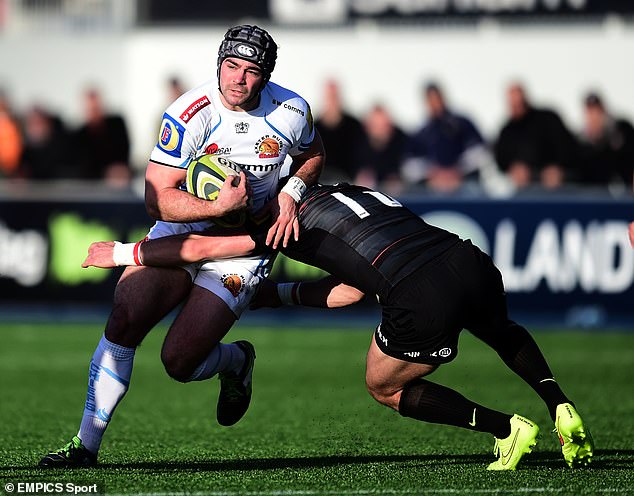 HOW PLAYING RUGBY DAMAGES THE BRAIN

Scientific trials over the past decade have established a clear link between repeated concussions and chronic traumatic encephalopathy (CTE) — a degenerative brain disease which can lead to dementia.

Mounting evidence over the potential dangers of head contact has led to increased awareness in physical sports such as football, American football, boxing and rugby.

Repeated blows to the head suffered on the field, from colliding with other players in the case of rugby or from boxers taking punches, are thought to be the cause of the irreversible damage.

The RFU admits that it poses a ‘significant potential risk of concussion’. It says there is one incident in every three professional matches. But it says the risk is much lower in amateur matches.

Researchers this year found young rugby players who suffer repeated small blows to the head can develop subtle brain damage — even if they are not serious enough to cause a concussion.

Western University scientists said their findings add to existing evidence that even if a knock to the head doesn’t lead to a concussion, it could still cause long-term brain damage.

He went back to the Dragons that year, playing a full campaign, but in the 2016 pre-season was knocked out again tackling Josh Navidi of Cardiff Blues.

‘That took six, seven months to get over,’ he explained. ‘You lose huge chunks of your days. You can’t continue playing when it gets like that.

‘I came back for a handful of games, took one knock against Ulster at Ravenhill – not even a big hit, just a run-of-the-mill tackle, and went off the pitch knowing I’d never step back on it again.’

While four of the new claimants want to remain anonymous, Hughes and 44-year-old Neil Spence, who played for Leicester, Gloucester and England Under-21s and has been diagnosed with early onset dementia, spoke up.

Hughes, now a referee and financial advisor, does not want rugby to suffer but is concerned the sport did not act early enough to save players from their fate.

‘If it is found they knew a lot more than they let on, then I have every right to feel let down by people put in positions of power,’ he added.

‘Did people at the very top have the knowledge to assist us players, physios and coaches on the ‘shop floor’ to stop those sub-concussions? That’s what this all comes down to.

‘When the NFL was going through its huge case there was evidence that concussion causes huge issues, so why did it take until years later for proper, realistic guidelines to come in?

‘It was the days when if you knew where you were playing and what the score was you could keep playing. We’re only talking 10 years ago.

‘It’s a long time coming this. We want it to have a positive impact with changes and better guidelines to come.’

Hughes wants a reduction in the number of substitutes allowed – stopping the ‘Bomb Squad’ tactic used by the World Cup winning South Africans in 2019.

‘Bringing on seven brutes half-way through a game is asking for trouble,’ Hughes commented. 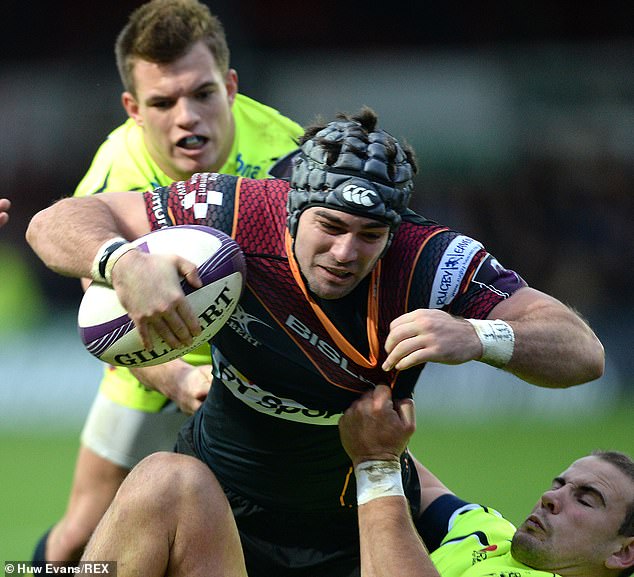 And he wants the Head Injury Assessment – a mandatory 12-minute test for concussion which was fully rolled out in 2015 – improved.

‘If you get smacked on the head why does answering a few questions on the side mean you should be able to go back on?’ he questioned.

‘You can see from us players that when you get hit damage is done, and damage stays. I have to hope the decision to retire at 28 is in my favour. As the guinea-pigs of this we are yet to see.’