Geelong coach Chris Scott was simply stating a fact when he declared Tom Stewart the Cats’ best player in 2021 after it became apparent the defender would, unless a miracle occurs, miss this year’s finals series due to a Lisfranc injury suffered at training before round 22.

During another COVID-ravaged season, the dual All-Australian has been key to the Cats conceding the second fewest points of any side in the competition. 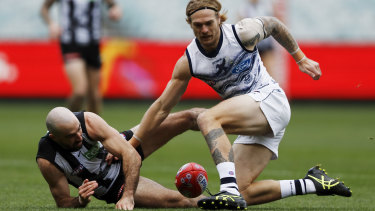 Steele Sidebottom and Tom Stewart compete for possession at the MCG.Credit:AFL Photos

He’s Geelong’s best intercept mark, sitting inside the top 10 in the AFL as he averages 3.1 per game, one per game above the Cats’ next best, Jack Henry. Stewart’s ability to float into a pack and cut off the opposition is as welcome as a mate arriving at the table with a jug of beer. That he wasn’t there when Melbourne’s Jake Lever kicked the ball low and hard to Max Gawn last Saturday night was obvious.

Stewart can attack too, rebounding like house prices when the Cats lose territory. 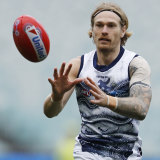 When he kicked in after a behind this season the Cats transferred the ball from one end of the ground to the other 33.33 percent of the time, ranking him second in the competition.

He can run, too, Stewart’s sprint up the MCG wing in the 2017 semi-final against Sydney part of the rich history he has created in his five AFL seasons.

And former teammate, champion Cats defender Harry Taylor, says Stewart has another unseen quality: “Don’t forget his leadership qualities either. That is the other part.”

In short, Stewart’s absence is a massive blow.

But the Cats have been here before, losing All-Australian Matt Egan before their 2007 finals series and Gary Ablett jnr before 2011 even started.

And they all prevailed.

“I don’t think you can cover the individual, per se, with what they bring but hopefully multiple other players can all chip in and do enough.”

Isaac Smith took six kick-ins in the final round and had the same success in setting the ball on its way towards the forward 50 as Stewart, with Mitch Duncan also suited to that role when he returns this week against Port Adelaide.

Premiership defender Tom Lonergan expects that pair of runners, Smith and Duncan, to not only take kick-ins but work backwards in Stewart’s absence to receive the ball and create run. Midfielder Cam Guthrie – who took two kick-ins in the final two rounds – also capable behind the ball. 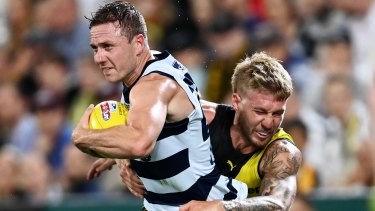 Duncan said on Thursday he expects Mark O’Connor will return to defence, and he will play a high half-forward role, although if he finds himself deep in defence he’s happy taking kick-ins.

“If I’m close enough I tend to take them, and if not, I’ll just play our formation the way I see it,” Duncan said.

“We don’t really have a designated kicker.”

Lonergan also likes the look of Mark Blicavs in defence to provide coverage, with his pinch hitting role in the ruck potentially going to Esava Ratugolea if Scott chooses to play him, something he was contemplating midweek.

Blicavs, a dual best and fairest, is a good defender who is better when he plays within his limitations, taking the first option, using his legs to drive into space with his ability to cover ground unparalleled.

The Cats have no shortage of options in defence, with Lachie Henderson, Jake Kolodjashnij, Jed Bews, Tom Atkins, and Jack Henry the mainstays, while Mark O’Connor and Zach Tuohy (when he returns from injury) are also solid defenders. Zach Guthrie remains a strong consideration as his intercept marking and kicking has improved markedly.

Like all defences, they rely on midfield pressure to make opposition entries as slow and high as a hot air balloon. When that happened during the second and third quarters against Melbourne, the Cats kept the Demons goalless through 21 inside 50 entries.

However, when the centre clearances were lost, Melbourne kicked seven scores (5.2) from their first 11 forward 50 entries in the final quarter, exposing the Stewart-less Cats who took just two contested marks for the match.

Taylor has confidence in former champion defender Matthew Scarlett’s ability to redesign the puzzle so the parts fit as they attempt to progress to a qualifying final against a talented Port Adelaide attack that has Connor Rozee, Orazio Fantasia, Steven Motlop and Robbie Gray buzzing around the feet of Charlie Dixon and Todd Marshall.

“He is always thinking about who fits best where. It is a real attribute of his that does not get spoken about enough. He has a good brain for that,” Taylor said.

“It is a matter of everyone trying to lift a bit to cover the strengths lost without Tommy Stewart.”

But he knows as well as anyone the best way to cover the loss of a key defender is to keep the ball up the other end.