Australia is bidding for the hosting rights to the 2027 tournament but will come up against stiff competition, potentially including Russia, the United States and England. 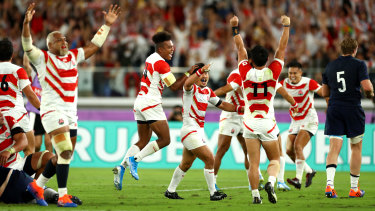 Convention suggests there will be an appetite to bring the tournament to the southern hemisphere after three consecutive World Cups in the north (England 2015, Japan 2019 and France in 2023).

But World Rugby chief executive Brett Gosper said the runaway success of the Japan tournament could bolster Australia's case as much as any geographic re-balancing. The first Asian World Cup delivered World Rugby a $246 million surplus, a $79.5m surplus for the Japan organising committee and an overall $7.8 billion "total economic impact" for the country. It set records for attendance and was the most-watched World Cup in history on social media views and television audiences.

"Coming to Australia puts us back on the Asian time zone and re-nourishes the importance of markets like Japan and other Asian markets that were created, in broadcast terms, during the 2019 World Cup," Gosper said.

"You've got to look it in terms of what it could do for Australia but also what that time zone could do to build on what was created in 2019. That's attractive for people evaluating this World Cup bid in Australia.

"We'll have to see where broadcast values sit at the moment, they're very centred in England and France. But Japan has become suddenly – or it was at the last World Cup – the third biggest (broadcast market), and it's important that we sustain that broadcast market in Japan and Asia. So it will be interesting to see how the future evaluation and estimation of those revenues are."

Australia will not know which nations it is up against until May next year when the formal bid compilation process starts, with World Rugby's Council to vote on the bids a full year later in May 2022.

Rugby Australia's bid team, headed by former Wallaby captain Phil Kearns, will have to win 27 of the 52 Council votes to secure the hosting rights.

Russia is its only declared rival at this stage, but will only be able to bid for the rights if the Court of Arbitration for Sport upholds its appeal against a four-year ban from international sport, handed down by the World Anti-Doping Authority late last year. 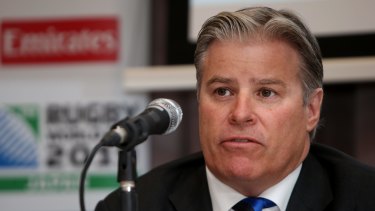 The CAS will hear Russia's case in November, but Gosper said Russia's interest was significant for the game either way.

"Russia is a former Olympic host, a former FIFA World Cup host, it is interesting that they see rugby as a major objective for the country," he said.

"It's an acknowledgement of the size of the Rugby World Cup now, but I think we need to take our time to see what is pronounced by CAS. There's a while before this plays out so we have a timeline that will allow us to deal with that candidature at the time."

The United States and England's RFU have declared their interest in hosting the world's third biggest sporting event, but indicated they see 2031 as a more realistic prospect.

Gosper did not announce how the bid would be evaluated, but World Rugby sources indicated the governing body would scrap the board recommendation in favour of a two-step process of technical evaluation and Council vote – most likely held via secret ballot.

The change has not been confirmed but a streamlined process, with a World Rugby recommendation removed, could help avoiding the controversy that plagued the awarding of the 2023 World Cup.

The technical evaluation recommended South Africa win the hosting rights, the board endorsed the recommendation, but France won the rights in the Council vote, with Japan voting for the FFR.

If World Rugby does move to scrap the recommendation, it will essentially return the process to its political origins, placing as much pressure on Australia's ability to win over hearts and minds as present a watertight commercial case.

Rugby Australia chairman Hamish McLennan said it was time to bring the tournament to the southern hemisphere.

"With France set to host the next World Cup in 2023 and following previous editions in the United Kingdom and Japan in 2015 and 2019 respectively, we firmly believe that the World Cup in 2027 has to be in the southern hemisphere," McLennan said.

"We have made significant headway in our preparation to bid for Rugby World Cup 2027, thanks in no small part to the support of the Australian Government to date.

"We look forward to working with World Rugby throughout the dialogue phase to develop a compelling business and delivery model. This is an exciting and important opportunity, not only for Rugby here in Australia, to ensure that hosting this tournament provides maximum economic stimulus to the country, as we continue to rebuild from the financial impact of COVID-19."