Gold Coast chairman Tony Cochrane says the Victorian government’s “hopeless” management of COVID-19 means it is “almost probable” the grand final will have to be played away from the MCG for the second year in a row.

But Victorian Sports Minister Martin Pakula took a swipe back at Cochrane on Sunday and stood firm, insisting he had “absolute confidence” the game would return to the MCG this year. The AFL has declined to comment. 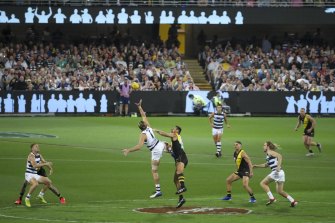 Last year’s grand final was played at the Gabba.Credit:Glenn Hunt

With Melbourne locked down, the Dreamtime match between Essendon and Richmond was played before a sellout crowd at Perth’s Optus Stadium on Saturday night, while next week’s Queen’s Birthday match between Melbourne and Collingwood has been shifted to the SCG.

The MCG is contracted to host the grand final until 2058, but Optus Stadium chief Mike McKenna has declared Perth would be keen to host the decider – which was shifted to the Gabba in Brisbane last year amid Victoria’s COVID-19 outbreak – should the MCG again be unable to host the game.

Perth has not been immune to the effects of the pandemic, with last month’s Western Derby played behind closed doors following a COVID-19 outbreak in Western Australia.

Pakula said he had “absolute confidence” the grand final would be played at the MCG and it was too early to be thinking about moving the grand final.

”It is very easy to forget that it is only just over one month ago that we had almost 80,000 at the MCG for the Anzac Day clash,” he said.

“I speak to the AFL most days, the fact that the West Australian stadium or WA government would like the grand final is not news, it is pretty obvious that they would, anyone would want it.

“But the fact is one of the reasons we are doing what we’re doing now, running this into ground and snuffing it out, is that there are a lot of incredibly important stuff happening in the second half of the year.

“We have school holidays in a few weeks away, AFL grand final, Melbourne Cup, Boxing Day Test, we want all of those things to happen in Melbourne.

“We want to be back in the situation we were, just a couple of weeks ago, where we had large crowds, full restaurants, business trading profitably and we are going to try to get back to the position as soon as we possibly can.”

Cochrane, whose company was involved in producing last year’s grand final entertainment, fuelled speculation that the game could be on the move when he said the prospect of the ’G losing the game again was on the cards. He said that Queensland should not host the game again, instead suggesting the fixture should be moved elsewhere.

“Given how hopeless your government are down there compared to every other state I’d say it’s almost probable it has to be played somewhere else. So maybe it’s time to share it around?” Cochrane said on Sunday.

“I’d share it around, although it’s certainly not my call.”

Pakula issued a retort: “The way the Suns are travelling, I don’t think Tony needs to worry about grand finals for a while.”

“The AFL grand final is scheduled to be in four months’ time, let’s concentrate on getting through the immediate circumstance by keeping Victorians safe. The good thing for us, we have a blueprint ready for reopening the ’G and I think I speak for the whole of Victoria when I say, we look forward to seeing fans back in the stands watching live sport,” Cox said.

Speaking after his side’s win on Saturday night, Tigers coach Damien Hardwick said Optus Stadium would be a worthy alternative to host the grand final.

“It is one of the best stadiums in the country, absolutely,” Hardwick said.