Former Hawthorn premiership captain Luke Hodge said he was shocked by the grave allegations made about the behaviour of former staff towards Indigenous players at his former club, saying he was unaware of anything of the extent of the claims in the report.

The ABC on Wednesday reported allegations contained in the report, including that the club demanded some First Nations players split from their partners and live separately from their family. In one incident a player and his partner were allegedly pressured to terminate a pregnancy to further his career, the ABC reported. 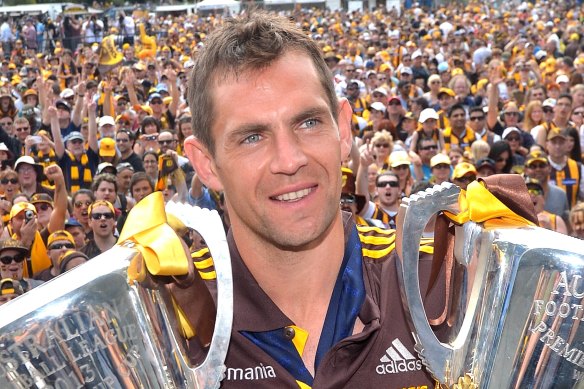 Hawthorn have referred the “disturbing historical allegations” to the AFL integrity unit for investigation, according to a club statement on Wednesday. The league is “finalising a process to investigate the allegations”, the AFL said.

Chief executive Gillon McLachlan is due to address the media on Wednesday morning.

“It’s shocking. Terrible. But you sit back and does it dampen … what we went through as a group, we had a lot of successful years, but at this stage that’s irrelevant because of what young blokes were told or what they were put through,” he said on SEN on Wednesday.

“When you get drafted by a football club, it’s supposed to be an exciting time of your life. It’s supposed to be, ‘My life has changed, now I have a pathway for the next 10 to 15 years hopefully’, that’s not what happened with these young kids.”

He added: “It’s a shock to the system reading some of the things that were alleged in that.

“It was a tough read, there’s no doubt. I think anyone who goes through that, it’s uncomfortable to go through and read. Your first thought goes to the players who went through it and the partners and the families that went through it because it doesn’t matter what your job is, it’s always family first and that’s the first people you look after.

“So to go through and read that and what’s been alleged, it’s very uncomfortable.”

Hodge said his first thought was to know who the players involved were but also recognised there was a reason they felt confident to speak because of the anonymity provided with the report authors.

“They don’t want everyone talking about them or going up to them. They’re hurting in private. At least now they’ve got a voice out there and hopefully a few people can chat with them, and they can feel that they are supported.”

Asked if, as captain during this period, he was aware of the allegations, Hodge said: “Not to the extent of the terrible stuff in there.”

Hodge said he didn’t know how a conversation could even start among teammates around some allegations involved, saying there were certain things that players did not get told by the club or teammates. “That’s not stuff that players would want to get out in the open to other players.

“When you have 18, 19, 20-year-old kids getting drafted, you always hear about break-ups and whether it’s the right thing, personally I’ve had a lot of private conversations with those guys, especially early on [for me], it was, ‘Is it the right thing for me to go back and see family and friends in Colac because of catching up, and my diet wasn’t great, and is it the best thing for my football’.

“So those conversations are had every day in big groups and small groups and conversations, but I’ve never heard anything to the extent of what was written in the article.

“My understanding was that it was family first [at the club, rather than football first] until you see things that were said to players and very clear, detailed memories for them because obviously clearly for a player and their partner to remember such detail for however long it was. It’s definitely stuck with them a long time. They’ve been in pain since.”