Tony Williams says it would be the fulfilment of a dream to finally play alongside Israel Folau at the Southport Tigers, describing his life-long friend as an “angel” who deserves the chance to give back to grassroots footy.

The Queensland Rugby League has cleared Williams to resume his playing career for the third-tier Gold Coast club, but Folau’s registration is proving more problematic. Folau and the QRL are at loggerheads over whether the cross-code star is bound by a contract to French club Catalans Dragons, with the matter to be decided in the Queensland Supreme Court. 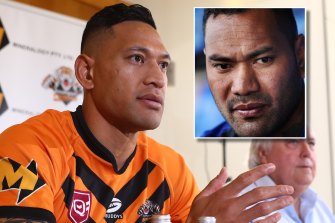 “My dad and his dad are cousins, I’ve known his family since we were kids. We did athletics together when we were really young teens.

“We’ve played against each other and I’ve always wanted to play with him. It would be something special.

“I know it’s only A-grade, we’ve done what we’ve done in the game, but it would be a blessing to play together.”

Like Williams, Folau jeopardised his career with a divisive social media post. The former Wallaby has been a lightning rod for controversy ever since, but Williams said he was misunderstood.

“I know him well and what they say [about him], he’s not; he’s a good mate, he’s a good family member and I only want the best for him,” Williams said.

“Sometimes you say things without thinking, but it doesn’t mean you are a bad person. Everyone in this world has an opinion, whether you take it the wrong way or not is up to you.

“He’s just been taken the wrong way. He’s a lovely bloke. If anything, he’s an angel.

“He’s not going to let all of this stuff get to him, he’s been in the game a long time and knows how the world works.

“He’s happy, we’re just glad we’re back training with the team. Being a kid again, I guess.”

Williams said he was grateful to Tigers patron Clive Palmer for giving him and Folau another chance. The man dubbed ‘T-Rex’ said he would be using the opportunity to mentor the club’s young players and coaches by passing on the experiences garnered during a rollercoaster career.

“Coming back to these community clubs is something we need to do more of,” Williams said.

“I’ve got a son who has just turned eight and it’s something I want to do for him.

“I want to do it for the younger generation because I know they cherish ex-NRL players coming and helping them.

“Other than my parents, when I made grade when I was in my teens, I never had direction from older players. I want to do that for the guys coming up.”