However fuzzy-headed Adelaide Crows star Chelsea Randall was after she was concussed in last week’s AFLW preliminary final, she could not have been clearer in her mind and words this week. She would not try to find a technicality that would free her to play in this Saturday’s grand final. She would accept with equanimity that she cannot play.

“I decided not to take any further action,” Randall said in an interview on the club’s website, “Because what kind of message would that be sending to grassroots football? Concussion is serious. It is scary.” 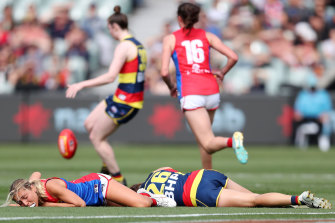 On this, Randall has a particularly poignant perspective. When she was 20, she was watching from the sidelines of an amateur match in Perth.

“A young man died in front of my eyes,” she said.

“He received a normal bump at a centre bounce, and he never got back up.”

Randall said the player had previously been concussed, but had medical clearance to play.

It’s a memory that would rattle a mind as surely as any punch, fall or bump.

In the video, Randall puts a smiling face on her decision not to pursue a chance to play in this week’s grand final. It would be easy to say that it was slim anyway. She would have had to convince the Crows’ medical staff to revise their diagnosis, then have that revision approved by the AFL’s doctor, Peter Harcourt. That’s a tighter angle than Dom Sheed’s in the 2018 men’s grand final.

But it’s not hard to think of other footballers who would have spent this week exhausting every medical and legal avenue in an effort to play. Injury drama is the stuff of grand final week. In a certain men’s competition we could name, can you imagine the fuss? 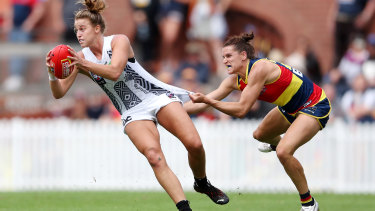 Chelsea Randall (right) in action against Collingwood during the AFLW season.Credit:Getty Images

And Randall is first and foremost a footballer, a trailblazer of this pioneering era of the women’s competition, a three-time All-Australian, and already a dual premiership co-captain, which of course does not mean that she has had enough, but yearns for more. It’s why footballers play.

But as the interview shows, Randall is also a leader, conscious always of a good greater than her own.

“As much as I am gutted, devastated, sad that I won’t taking the field with my teammates in the grand final,” she says, ” the last six months – the last 10 games – haven’t been about me. It hasn’t been about one individual. It’s been about this group.

“They don’t need me. They’ve proven that, themselves. They can get the job done without me.”

She said she would be on the boundary line, anxious and proud like a parent.

When the AFL mandated earlier this year that a concussed player sit out for 12 days, so nearly always ruling him or her out of the next game, some immediately asked: what if it’s a grand final? Now, clarified by Randall, the answer is plain: they don’t play. Full stop.

There was one solution floating around in the footy ether this week. It was to move the bye from the end of the home-and-away series to the week before the grand final. This is unsustainable in two ways. One is that the pre-finals bye has been good for the game, freshening up all teams in the finals.

The other is that a pre-grand final bye for the sake of concussion, a relatively rare occurrence, would be an overreaction. Worse, since we’ve at last decided to take head injuries utterly seriously, it would look like a work-around, which would raise doubts about how seriously we’re taking head injuries after all.

Listen to a leader with her head screwed on.