Melbourne Rebels lock Trevor Hosea has someone dear to his heart steering his hand every time he takes to the rugby field.

The 21-year old aspiring Wallabies forward writes the name of his maternal grandmother, Tereau Simmons, on his wrist tape before each game, including Friday night’s home clash at AAMI Park against the New South Wales Waratahs.

It’ll be the Rebels’ first home game in a year and the Victorian-raised Hosea’s first on his home stadium. 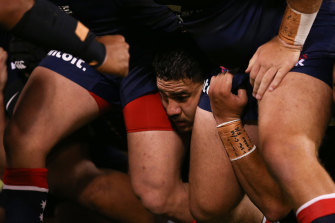 Trevor Hosea writes the name of his grandmother on his wrist tape before every game. Credit:Getty Images

Hosea has begun to make his mark in the past two seasons and toured New Zealand with the Australian Wallabies last year to continue his transition towards the international game.

But while the 204-centimetre, 117-kilogram lock stood tall for the Rebels during their season away from home last year, he did so with a heavy heart after his grandmother died in the family’s homeland of the Cook Islands.

“I write down my grandma’s name,” Hosea said.

“She played a massive role in who I am today. She is my rock. She passed away last year while I was on tour so it was a bit hard with the COVID-19 [travel bans] to go and see her but we had a lot of family over there to support her.

“I have a lot of love for her and she’s been my inspiration.”

Hosea credited the love of his parents, Tangaroa and Natalie and the support of his teammates in keeping him on tour when he wanted to come home and grieve with his family.

“Having the boys around me 24/7 was a big help for me emotionally.

“I had a chat to mum and dad, they said she would want you to keep pushing and she is there with me in spirit all the way.

“That was a big help to me emotionally to get through the games and the boys understood I might be off a bit at times.”

Rebels coach Dave Wessels said Hosea was a credit to his family for the way he has handled such an emotional challenge and how he has handled playing older, craftier opponents.

“Trev has been thrown in the deep end a little bit,” Wessels said.

“With the departure of Matt Philip, he has taken on a big workload and he’s responded well to that.

“We are proud of the progress he has made but there is still a lot of growth – it’s exciting to think about the type of player Trevor can become in time.”

Hosea is equal third with 13 lineouts won after four rounds of Super Rugby AU and he has been making use of the guidance of fellow forward Michael Wells, forwards coach Geoff Parling and the lessons learned while on tour with the Wallabies last year.

Hosea, who spent part of his teenage years at Fountain Gate College’s rugby program, estimated 15 to 20 family members would be in the crowd on Friday night along with some former schoolmates.

The Rebels have made a 1-2 start, including a 10-7 win over the Western Force in Perth last round, and while Hosea is focused on the Rebels, he hopes his play can see him earn a Wallabies call-up later this year.

“I’m just focusing on letting my rugby do the talking but I’m definitely looking for a chance to push for higher honours,” Hosea said. “Hopefully that is enough.”