In the AFLW festival of footy on the eve of the men’s grand final, North Melbourne cement themselves in the eight, Collingwood claim first win over Essendon and Hawthorn secure their maiden AFLW win over winless Sydney

The drizzly conditions didn’t deter fans from turning out in numbers on Friday for the AFLW festival of football on the AFL men’s grand final eve public holiday, which saw two sellout matches at Punt Road Oval.

Fans lined the fence at Punt Road for North Melbourne’s win over the Western Bulldogs and Hawthorn’s win over Sydney, as both games were locked out as at capacity of just over 2000 spectators.

Down the road, a crowd of 3,412 lined the boundary at AIA Centre to see Collingwood claim the first win over rivals Essendon. It was the Magpies’ first game played for premiership points at their training ground since 2017. 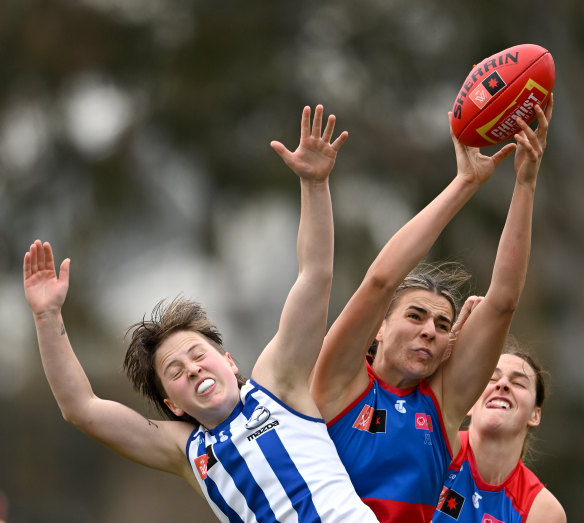 With the grandstand at Punt Road Oval out of action due to safety reasons, both it and AIA didn’t have any stands for fans to sit in or be sheltered from the conditions.

Chyloe Kurdas noted on Fox Footy that it was “good to have women involved in the men’s grand final weekend” and fellow commentator Kelli Underwood praised how “electric” the crowds were. However, fans across social media lamented the venue choices given the wet weather conditions and limited capacities.

Collingwood claimed the first win over club arch rivals Essendon in a contested and physical game in wet weather conditions at AIA Centre. The Magpies took the points with an 11-point victory.

It was a scrappy arm wrestle for the majority of the game, before back-to-back goals from 18-year-old Eliza James gave Collingwood a healthy lead, which Essendon’s attack couldn’t breach. Maddy Prespakis was the star of the game with 31 disposals, five clearances and a goal, but her side couldn’t breach the Magpie’s impenetrable defence.

Post-game Fox Footy boundary rider Megan Waters asked Collingwood goalscorer Chloe Molloy if there was anything better than singing the song in front of a home crowd, to which the Magpie star quipped back: “Yes, singing it when you beat Essendon”. 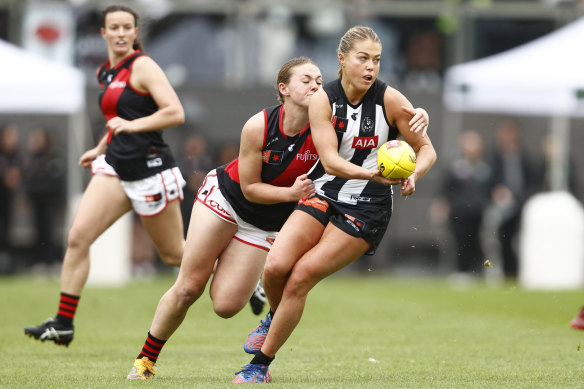 Collingwood claim first win over Essendon in the AFLWCredit:Getty

Hawthorn secure their first win in the AFLW over fellow expansion side Sydney, who are still without a victory. In front of a sold out crowd at Punt Road Oval, the two sides battled hard in a heated contest with plenty of push and shove. Hawthorn, who came out in their Indigenous guernseys, with the needed edge in the end, claiming a slim four-point win.

Sydney burst out of the starting gate with four goals within the first 12 minutes of the opening term, three of those off the boot of Brooke Lochland, but they didn’t get another all game. 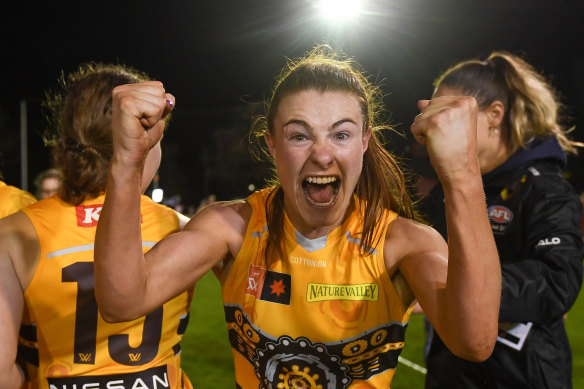 Hawthorn, on the other hand, responded with the next five majors, including three from young gun Tahlia Fellows. Lochland had another opportunity in the dying minutes of the game, which would have secured the win for her side, but slipt over right in front of goals with Hawthorn defender Emily Everist right on her tail.

Earlier in the day, North Melbourne’s win put them in the top eight halfway through the home and away season, while the Western Bulldogs undefeated run comes to an end.

Melbourne’s Tayla Harris booted three goals against her old team Carlton, bringing up her 50th career goal in the AFLW, as the Demons made short work of the injury-weakened Blues at Ikon Park.
Liv Purcell had 30 disposals for the Demons in their 42-point win. Mimi Hill battled gamely with 33 possessions for the Blues.