Harry Grant still has the zipper running the length of his right shin, but there is a silver lining to the scar from the flipped all-terrain vehicle accident that left his leg “hanging on by the tendon”.

Grant is emerging as a genuine strike weapon in Australia’s World Cup defence, be it as a starting hooker or bench back-up for Ben Hunt.

Long before Grant could consider rugby league as a career, the game was taken away from him as a teenager. First by a staph infection and several shoulder operations at age 12 that at one point had doctors fearing the worst.

Then by the ATV crash that required a series of pins and screws being drilled into his fractured leg, which was held together by a frame of clamps for weeks.

“We crashed one of the surf-lifesaving ATVs on the beach,” Grant says as he pulls down his sock to show the dints and scar left by the accident.

“We were on patrol and managed to flip it and land it right on my leg. It was a pretty ugly compound fracture and it was all pretty scary when it happened. She’s come good now but at the time it was very ugly.

“I was out for about a year. I look back on it now and I think everything happens for a reason, it was an external fix and it was kind of hanging on by the tendon. So it was pretty gruesome.

“But I was 14 then and after the infection in my shoulder, it meant I had been out for two years and when I came back – that’s when I moved into playing dummy half.

“The way I look at it, if that hadn’t happened, without those two years out I might not have ended up as a dummy half and ended up making a career of this.”

Grant took time adapting to the intricacies of dummy-half play and the extra defensive workload. 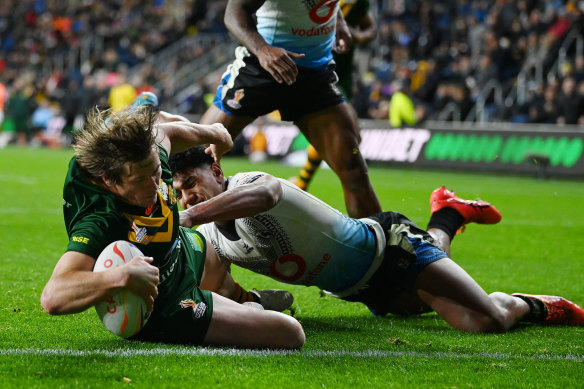 “Eventually, I got my head around it and the way you have to be involved with every play or at least touch the ball every play. 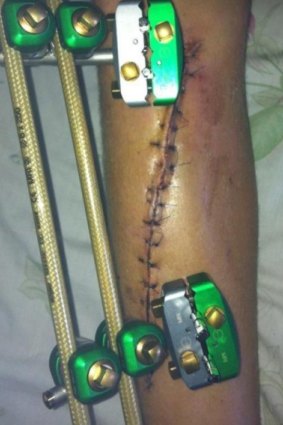 The external fix of Harry Grant’s leg after a compound fracture.

“I had been playing in the halves and was pretty happy picking and choosing when I chimed in. But I got used to it and now I think I’m pretty lucky with how it all panned out.”

It all led to he and Hunt operating as a dummy-half duo, first for Queensland and now Australia.

The Storm rake has stressed repeatedly he is comfortable starting at hooker, as was the case against Scotland in the 84-0 rout on the weekend, or coming off the bench as Hunt’s back-up.

Grant has, after all, been following in Hunt’s footsteps for almost 20 years, running his kicking tee and making a nuisance of himself when his dad Paul coached his future teammate at junior level.

Coach Mal Meninga plans to play Daly Cherry-Evans and Nathan Cleary – together in the halves or getting 40 minutes each at halfback – in Australia’s last pool game against Italy in what shapes as a final selection shoot-out before the quarter-finals.

Captain James Tedesco will be given the choice of playing against Italy, the team he represented in two previous World Cups, with Isaah Yeo and Cameron Murray to lead the side should he sit the match out.

The likes of Cameron Munster, Josh Addo-Carr, Patrick Carrigan, Angus Crichton, Jake Trbojevic, Valentine Holmes, Hunt and Grant are in line for a rest due to Meninga’s plan to give players two games each during the pool stages where possible.