When the Brumbies played the Chiefs in Hamilton last weekend, the crowd was just over 10,000.

When the Reds went to Dunedin the week after they were crowned Super Rugby AU champions, fewer than 11,000 locals could be persuaded to attend, even though the city’s famous students were still in town. 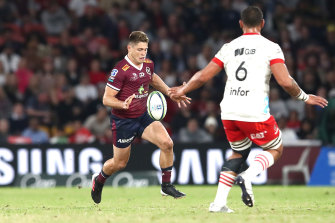 Australian teams, including James O’Connor’s champion Super Rugby AU champion Reds, are yet to taste victory in 10 outings against the Kiwi franchises.Credit:Getty

The Kiwi franchises want Super Rugby Trans-Tasman. Crusaders CEO Colin Mansbridge was genuine in the Herald this week when he said “the last thing” the Kiwis want to do is play each other all the time.

But here’s where we need to introduce a bit of what the Australian cricket team would no doubt call “elite honesty”. The Kiwi sides want that for reasons that are not necessarily conducive to the health of Australian rugby.

If fact, they want it to avoid a negative – flogging their players to breaking point every week – and avoiding a negative is not the same as a positive, especially for Australian rugby.

Sure, they argue that the Australian sides need time to improve and the only way they can do that is by taking their “medicine” for weeks, months, maybe even years.

Crowds appear to have gone up – swelled by expats – but that is unsustainable. Australian rugby should not function to serve New Zealanders.

That’s not much of a pitch to Australian fans, to be fair. It’s like punching someone in the face but assuring them that having stitches inserted without anaesthetic each week should eventually heal the wound.

But, the Kiwis will say, you can’t avoid us just because we beat you, or else you’ll never improve.

In response to that, Australian fans I know borrow a line from Fleetwood Mac: “Tell me lies, tell me sweet little lies.” They couldn’t care less about being ‘deceived’ about the quality of Super Rugby AU if it is producing an Australian winner each week and making them feel good.

I don’t know how the ‘metrics’ are doing for Super Rugby Trans-Tasman in Australia, but I can guarantee you there will be no repeat of the big numbers that tuned in for the Reds v Brumbies final. Australian hopes are already dashed, and the only interest now centres on whether Australian teams can break their duck. But even that would be fool’s gold if taken as a sign that suddenly the concept will work in time.

Crowd sizes in Australia also appear to have gone up – swelled by the expat population in places such as Perth – but that is not sustainable long-term if it comes at the cost of Australian interest levels. Australian rugby should not function to serve New Zealanders in Australia.

Perhaps rugby bosses on both sides of the ditch need to take a hard look at their current compatibility, and really take an inward focus on what they want to achieve.

For all the disdain it attracted, NZ Rugby’s eight-team Super Rugby model proposed last year was probably the way to go from a high-performance viewpoint, given Australia’s skinnier depth chart.

But it was rightly rejected by Australia because of the damage it would cause to the game nationally.

So, what does that tell us if both unions are ‘right’ but can’t get on the same page? For mine it says they have different strategic needs and priorities at present, ones that can only be met by putting some distance between their domestic competitions.

They won’t do it, but NZ Rugby should really let Australia go its own way for the time being, and build out its own domestic eight-team competition with the five current sides, Moana Pasifika, the Fijian Drua and a new entrant from a growing population centre such as Tauranga.

Fears of harming the All Blacks by diluting the strength of their teams stalk the decision makers at NZ Rugby, but such a competition would hold far greater appeal to a New Zealand fan than the trans-Tasman alternative.

So, Australian fans must not feel bad if they voice their preference for retaining the current model, with a three-month Super Rugby AU competition to be followed by trans-Tasman games (although preference would be to have the crossover games take place during the Super Rugby AU season, mirroring the European model).

They might just find that supporters in New Zealand want something similar.