Canterbury’s major sponsor, beer baron Arthur Laundy, believes Adam Elliott deserves one last chance at the club, but says he must swear off alcohol completely given it has been the common denominator in all of his off-field dramas.

Elliott’s future is again at the crossroads after he was ejected from a Gold Coast restaurant after a toilet tryst with NRLW player Millie Boyle. 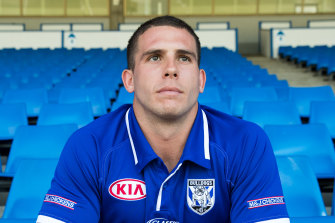 The Bulldogs have stood down Elliott pending an NRL integrity unit probe into allegations he was asked to leave the White Rhino restaurant after being busted in the men’s bathroom with Boyle. The club will wait for the NRL’s verdict before proceeding, but several powerbrokers have run out of patience and are prepared to tear up his contract pending legal advice.

One influential figure at Belmore who believes Elliott should be spared is Laundy. The veteran hotelier has been active at the club since becoming its major sponsor in 2020 and helped convince Elliott to re-sign when there was a more lucrative offer from the Warriors.

During his six decades in the liquor trade, Laundy has seen plenty of lost causes due to alcohol, but he is adamant Elliott isn’t one of them.

“I hope they keep him in the fold,” Laundy told the Herald. ”I’ve never kicked a person while they are down, I’m here to help and encourage and teach a person. 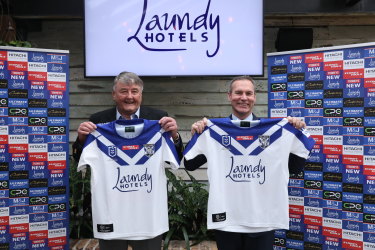 “I’ve had 60-odd years of experience in the liquor trade; I’ve seen them go down. If he was to go down as a result of this and lose his position, it would have an enormous psychological effect on that young lad.

“He was going to go to the Warriors, I took him and his manager to lunch … he knocked back bigger money in New Zealand to stay with us. As a result of that, he’s become like another son to me.

“Last night Adam called me and he was so down, he knew he’d done the wrong thing. He said, ‘I’m so sorry I let you down.’ I said, ‘You’ve let yourself down’. I told him, ‘I’m still here for you and will always be here for you.’”

Given his long rap sheet, another strike and Elliott could be gone. The back-rower was photographed drunk and in the nude during Canterbury’s Mad Monday celebrations in 2018 and again generated damaging headlines when close friend Michael Lichaa busted him kissing his fiancé during a drunken get-together earlier this year.

Laundy has made his feelings known to the Bulldogs hierarchy, but will accept whatever decision they make on Elliott’s future. Regardless, Laundy believes Elliott shouldn’t drink again.

“He needs to give the grog away,” Laundy said. “You only need to look at what’s happened on each of the occasions [he is intoxicated]. He’s got that gene in him that doesn’t help when you’re drinking.

“Last night he said, ‘I will never, ever let you down again.’ I have to believe it and will help him.”

New Canterbury supremo Phil Gould has been tasked with leading the club’s investigations.

The drama comes at a time when the Bulldogs have been trying to create salary cap space by informing almost a dozen of their off-contract players that they won’t be granted extensions.

Should Elliott be sacked, his money could be used to try to further regenerate a roster that will include Matt Burton, Matt Dufty, Josh Addo-Carr and Brent Naden from next year.