Saint-Etienne: Wallabies coaches are trying to reverse their team’s poor discipline by punishing players with burpees and extra running for minor indiscretions at training before a clash against Scotland during which clever kicking will be a primary objective.

In a bid to raise training standards and improve the team’s World Cup credentials, players are under no illusions regarding expectations following six losses from nine Tests this year.

During the Australia’s biggest session of the week on Tuesday, just outside Saint-Etienne in France where the team is based until Thursday, players who were offside or accidentally hit someone high were punished.

Since the Wallabies were trounced 40-14 by the All Blacks at Eden Park last month, it has been the most urgent area of focus.

It has also opened the door for a welcome return for some good old-fashioned burpees.

“We’ve been implementing stuff around burpees for offsides and really coming down hard on repeat offenders,” Wallabies halfback Tate McDermott told the Herald. “We can’t have that if we want to be a serious threat at the World Cup.” 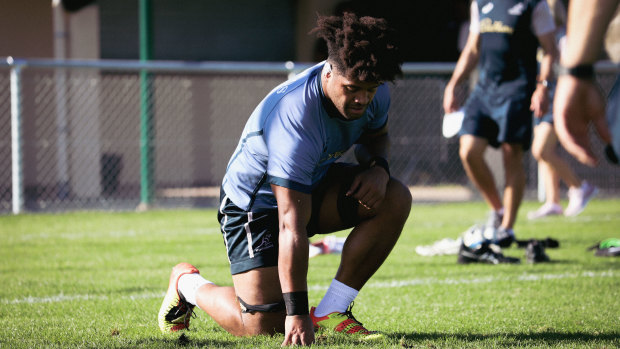 Coach Dave Rennie wondered aloud before the team departed Australia for a five-match European tour whether such ill discipline could be blamed on bad selection.

A closer examination of Australia’s performances this year highlights an alarming trend when it comes to giving away penalties.

The Wallabies have not conceded fewer than 10 penalties in any Test this year.

On just two occasions — against England at the SCG and in the first Bledisloe Cup match in Melbourne — have the Wallabies’ opponents given away more penalties.

As for yellow and red cards, Australia’s record doesn’t make for pretty reading either. The men in gold have copped 11 yellow cards and one red card in 2022.

By comparison, their opponents have been shown eight yellow cards.

“[Discipline] is massive … particularly coming up against these northern hemisphere sides,” McDermott said. “They feed off field position and if you give away a penalty, you’re in your own corner, you’re under the pump. We’re just trying to get that out of our game. We understand it’s not going to happen overnight.”

It will be intriguing to see what style of game the Wallabies implement. A winless spring tour last year, which included defeats to Scotland, England and Wales, will have forced a rethink when it comes to strategy.

Asked whether Australia would be audacious or conservative, McDermott suggested somewhere in the middle was the sweet spot.

“I think we’ve tried to change into a hybrid side — fans will probably hate to hear this — where we kick a little more,” McDermott said. “It’s not aimless kicking though.

“That’s been the biggest criticism of Wallabies teams in the past … that when we try and kick more, it’s pretty aimless.

Watch all the action from the Wallabies Spring Tour with every match streaming ad-free, live and on demand on Stan Sport. Kicks off this weekend with Japan v All Blacks (Saturday 4pm AEDT) and Scotland v Wallabies (Sunday 3.10am AEDT).