Geelong speedster Gary Rohan is likely to make an earlier than expected return for his first senior match of the season when the inconsistent Cats seek to rebound against Port Adelaide on Saturday.

Rohan, the dashing medium-sized forward, has not played a senior match this season as he dealt with a sciatica issue in his back and hip that derailed his pre-season. He was put on a program that led to him being able to train without pain, and has now had two matches in the VFL. 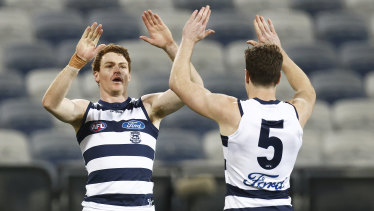 Gary Rohan is expected to reunite with Jeremy Cameron against Port Adelaide on Saturday.Credit:Getty Images

He increased his loads last weekend during a VFL bye, to the point coach Chris Scott all but confirmed his inclusion against the Power at GMHBA Stadium.

“He will play this week, I think. We want to see how he goes over the next few days. He doesn’t need to do anything special to be available,” Scott said.

“At our best, we like that combination with [Tom] Hawkins and [Jeremy] Cameron, Rohan, being in there a bit different. It worked a little bit through the pre-season which was hard because he was injured for a fair chunk of it. [We are] trying to vary up his role a little bit because it is one of the difficult roles in the game.

“It is very hard to be consistent in that position because you are at the mercy of the way the game is being played up the field.”

Scott said the Cats had been working on using Rohan further up the ground but said his pressure close to goal was important. He is likely to share the role with small forward Tyson Stengle, one of the recruits of the season.

The Cats were overrun by St Kilda in a third-quarter wipeout at Marvel Stadium last weekend, leaving them with a 5-4 win-loss record and with back-to-back wins only once this season.

They have experimented with positional change to provide a new look or enhanced drive through the midfield and half-back, but that may not last, for Scott said the Cats have “a few options to consider”. They have used Mitch Duncan as a rebounding half-back, and started Tom Stewart, a three-time All-Australian half-back, on a wing against the Saints.

Jed Bews (concussion) has emerged from protocols and will be available for selection, while ruckman Rhys Stanley aggravated an ankle issue against the Saints but played out the game. He has had a light week of training, with Scott expecting him to play. Shaun Higgins (general soreness) may not play until after the mid-season break.

Hibberd, who has yet to play a match this season, hopes to return for VFL affiliate Casey next weekend (Casey have a bye this weekend). Salem, who had chipped cartilage in his knee and required surgery, may also return then.

Goodwin said it had been a frustrating few months for Hibberd.

“Initially, it wasn’t too [bad] and then he re-strained it for a second time, so we took a longer period to rehabilitate one of his calves,” Goodwin said.

“Then right as he was about to return to play VFL footy he got a little slight strain on his other calf. It has been a bit of an ongoing thing for the last 10 or 12 weeks, which has been disappointing for Michael because he has been really close a couple of times.”

James Harmes (hamstring) will be out for at least a fortnight, as the unbeaten Demons face struggling North Melbourne at Marvel Stadium on Saturday.