First published in The Age on September 4, 2011

SURE, it might not have mattered a jot in the bigger picture. And yes, Hawthorn was playing with a second-string side against Gold Coast yesterday, resting eight players including Lance Franklin and Luke Hodge, but the Hawks only narrowly averted what would have been an awful embarrassment ahead of the finals, prevailing by nine points. 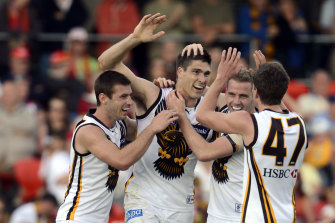 The players that really stood up for them were the inclusions that have given this side such renewed zip and impetus this year. Luke Breust kicked five goals, four in the third quarter. Isaac Smith and Brendan Whitecross kicked three each and ran hard. Paul Puopolo made a game-saving tackle deep in the last quarter after a gut-busting chase.

But from there it was hard to fit too many Hawks in the “best” column. The Suns did everything but win this game: they won three out of four quarters, they had more of the best players on the field, and unlike on a few other occasions this year, they fought to the death for the points. They still haven’t won a match at home.

What they lacked was composure. A lapse in the third quarter, where Breust was allowed to kick four goals in 15 minutes, and Smith another two, let the Hawks in. Late in the last quarter, the Suns blew many opportunities to snatch back the lead. Youth, fatigue and inexperience all told against them. 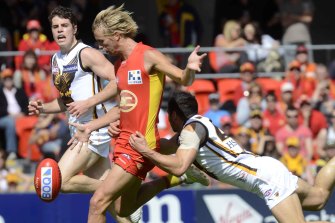 But it was a bright finish to their debut year in the competition, and a few more grabs were added to the club’s highlight reel. Like Harley Bennell’s sharp intercept and 70-metre dash for goal. Bennell, the No. 2 pick, is starting to show why he was so highly rated after a troubled first year.

Brandon Matera had his best game, chipping in with three goals. Karmichael Hunt made several eye-catching contributions in his most assured performance yet. Then there was Trent McKenzie’s 80-metre punt into an unguarded goal from near the centre circle. Sadly, it bounced on its end a metre out to be whisked away by the Hawks defence.

Simply, the Suns just aren’t fit or, more harshly, willing enough yet to run hard in both directions: too many Hawthorn goals came over the back, with forwards casually loitering goal-side of their opponents and allowed to run onto the ball in hectares of space. When the Suns catch up or wake up, every other team should be very afraid. 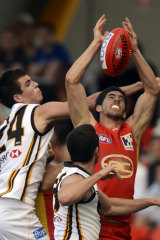 So Guy McKenna has plenty to work with in 2012, but how about Alastair Clarkson next week? He probably won’t give this game a thought, but the Hawks are going to have to be a lot better when they face the rampaging Cats, a side they haven’t beaten since their 2008 premiership triumph.

“We don’t usually concede [59] inside-50s,” he admitted later. “Gold Coast, if they were a little bit more experienced and polished — which they will get over the next couple of years, I’m sure — they would have put us to the sword.

“The performance was nowhere near as polished as we could play, but we acknowledge that we’re taking eight seasoned campaigners [out of] our side . . . They’ve helped us get to 17 wins and four losses, and it was a very unique set of circumstances that allowed us to put some game time into some [other] players.

“We got the job done in the end — hardly impressive, but in terms of our preparation for a hard qualifying final versus Geelong, that was really our clear goal. We wanted to win of course, but the clear goal was to get as many players available for us with some sort of hardened AFL match footy in the home-and-away season.”

Five goals yesterday made it 30 goals in 16 games for the lively half-forward since his debut in round eight against St Kilda, including several games where he started as substitute. Lock him in for the finals.

If Gary Ablett is in the hunt for a second ‘Charlie’, he did his chances no harm with another blinding performance for the Suns. The little master collected 43 possessions for Gold Coast, brought his younger teammates into the game and was a giant headache for the Hawks in the middle of the ground.

If Karmichael Hunt (pictured) does decide to return to rugby league at the end of next year, it will be AFL’s loss, because at the end of his first season he looks a lot more comfortable in the game than he did at the beginning. Hunt broke some lines, mostly kicked laces-out and tackled tough yesterday, and he’ll be a lot better next year.