BRISBANE Lions were the side with the two big forwards, the Bulldogs the side trying to convince everyone, including themselves, that they could do it in finals without a power forward. Last night was an argument for the little man with the short Dogs kicking themselves into a second consecutive preliminary final. 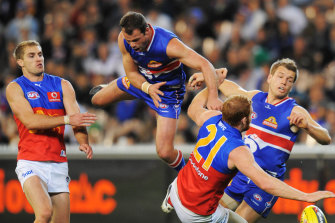 The Dogs, having won one of their past four finals, have now so far replicated their season of last year: make top four, lose the first final, win the semi-final and find themselves in a preliminary final. Last year they went down narrowly to Geelong in that prelim. This time they now face St Kilda — the team they have lost to twice already this year. Without wishing to rain on last night’s parade, there is a foreboding sense of history repeating about the Dogs.

It is perhaps a harsh judgment for they only lost narrowly to Geelong — as ever — last week and were emphatic in victory over the Lions, so they have done little to warrant cynicism. Indeed their performance last night was dominant in conditions made for the small running team, but they now need to overcome the preliminary final hurdle to advance. Those chances will not have been helped by the last-quarter calf knock suffered by Ryan Griffen.

The Dogs came with a hunger for the contest that was not matched by the Lions. Brisbane had the self-satisfied appearance of an outfit whose final was last week when it came from the depths to overhaul Carlton. 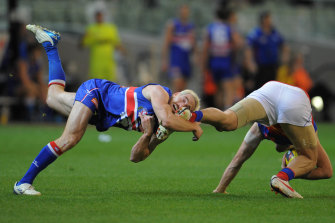 The knowledge of that comeback effort was the only reason to fear, as the game wore on, that the Bulldogs could be challenged. That and the fact the Lions were kicking with the wind in the last quarter. The fears were misplaced. The Dogs, as shown by their third-place season finish, are a far more mature outfit than Carlton, and Brisbane it seemed had used its get-out-of-jail-free card last week.

It is the weekly argument about the Dogs, whether they can win without a recognised power forward. The answer last night was that when they comprehensively win the ball in the middle then it is not difficult to find someone, anyone, to kick goals. They also found conditions to their liking — with a strong and gusting wind it was not a night to be a tall forward waiting on a ball that would variously fall short or float long. Reading play on irregular kicks was an impossible task and thus played to the Dogs’ fast run-and-carry strength.

Mitch Hahn kicked four and Nathan Eagleton three but they can credit it to the fact that Matthew Boyd was outstanding in the middle of the ground, Daniel Cross made Simon Black into little more than an onlooker with a hamstring strain, Griffen, until he injured his calf in the last quarter, atoned for his finals black spots and Daniel Giansiracusa found space and time like few others, and Jarrod Harbrow rebounded the crumbed ball in defence from the Jonathan Brown and Daniel Bradshaw packs. 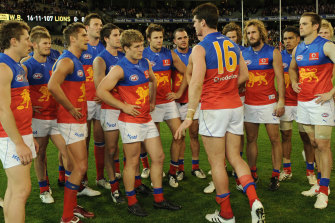 Jonathon Brown talks to his teammates after the loss.Credit:Vince Caligiuri

On a warm night of challenging, windy conditions the Bulldogs came with a mindset to attack the man and the cleaner skills to execute with the ball. While the Lions should have had the forward ascendancy with the two tall forwards, they could manage just three goals for the first half — and no goal in the first quarter.

A goal in the final term presented the argument for the Dogs scoring when Harbrow gathered across half-back and scooted about, taking several bounces before kicking long to Jason Akermanis who turned on a heel and kicked a perfectly weighted ball long to the goal square for Shaun HIggins to run on to mark and goal. Two long kicks forward, both marked by short players on the lead or in contests. It can all look simple, even with little men doing the work. The Dogs established their early break with Callan Ward setting up the first goal then kicking the next. Jared Brennan and Luke Power scouted behind the ball to give the Lions some rebound and present to Bradshaw who had a couple of early shots only to see the ball fade right at the city end.

With howling gales across Melbourne throughout the day, the city end of the ground proved the harder to kick to. Despite the flags on the stand indicating the wind might push the ball right to left, shot after shot at goal went left to right. It is a trick wind at the MCG. 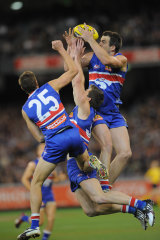 Daniel Cross shut down Simon Black such that he had scarcely any influence at all. Agitant forward Jason Akermanis — the former Lions premiership player — was almost knocked out in the third term in a tackle but courageously stayed on. Jonathan Brown playing with a fractured eye socket — just a flesh wound — was the most dangerous Lions player for a half before Brian Lake got on top of him and the Bulldogs got on top all over the field.

For Brisbane it was early in the last quarter last week when it came back from five goals down. The toss of the coin could have proved critical in this game. With strong gusting winds favouring the Punt Road end to which the Dogs won the toss and kicked in the first quarter a match-defining margin was established early.

The Dogs have made good on their third place and have won through to the preliminary final for a second consecutive year. Meeting the Saints next Friday night, they will need something more than was on offer last night. — MICHAEL GLEESON

‘Perhaps if it wasn’t windy, it [the margin] might have been a few goals more, we dominated for most of the night.’ — Western Bulldogs coach RODNEY EADE.