THE West Coast Eagles have earned the chance to settle a grand final score with Sydney after a courageous 10-point win against Adelaide at AAMI Stadium yesterday. 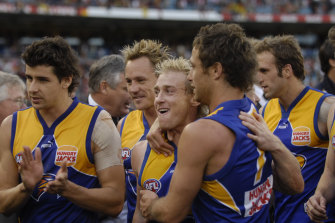 With bitter memories of their four-point loss to Sydney last year, the inspired Eagles came from 22 points down at half-time to snare one of the finest victories in their 20-year history.

Everything seemed in the Crows′ favour in this gripping preliminary final – the lead, the relentless urging of 50,514 fans (a figure just seven short of the attendance record) and the ascendant midfield.

But as they say in football classics, you can hold champions such as Chris Judd and Ben Cousins for some of the time, but not all of the time.

Their influence in the third term, when it became obvious Adelaide’s week off would not come into the equation, was significant. When they brought others such as Daniel Kerr, Adam Hunter and Ashley Hansen into the thick of play, it became obvious that Adelaide was not about to overcome its nemesis. 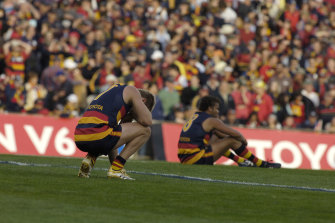 The Eagles have beaten the Crows in six of their past seven encounters and won the past four in a row, including a preliminary final last year.

A crucial turning point came at the 13-minute mark of the second quarter when Adelaide ruckman Rhett Biglands injured his left knee when he tripped over a teammate. It meant Matthew Clarke had to carry the ruck duties by himself, and Dean Cox assumed control.

However, nothing could be taken away from the Eagles because few, if any, of their kicks came easy. Adelaide should have made them pay for poor kicking early – the Eagles had 2.7 on the board at half-time – but was not good enough.

The return of Brett Burton and Andrew McLeod had a positive impact and they repaid the faith shown by the selectors. But Adelaide may have been better off going in with Ken McGregor as it lacked his marking ability up forward.

Simon Goodwin played on Judd for most of the time and the battle between them was generally even in the first half. 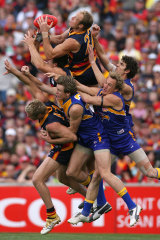 Adelaide’s Ian Perrie tries to mark in the pack.Credit:Sebastian Costanzo

But as the match progressed, Judd broke clear and became a dominant factor.

Nathan Bassett, back pocket in the All-Australian team, had an ordinary day. He struggled against Hunter, and when coach Neil Craig finally put Ben Rutten on to him, and Bassett on to Quinten Lynch in the last quarter, it seemed a move of desperation. It also didn’t work.

Adelaide led until seven minutes and 19 seconds into the last quarter, when its midfield was officially pronounced “dead”. Like so many times before, the Eagles′ intensity and ability to run out the game better was far too daunting.

The Crows continued to battle gamely, and with two goals from Nathan Bock in the last four minutes of the game to put Adelaide within four points, there was the slightest of hopes that it could steal back the lead within the last 30 seconds.

With the crowd roaring, Adelaide won what was thought the most important clearance of the day, and Goodwin was about to deliver a pin-point pass to a forward. But the whistle blew, Tyson Stenglein was given a free kick, and it was game over. Hansen kicked a meaningless goal after the siren.

Ultimately the Eagles were too good. In fact, they should have made Adelaide pay even more dearly in the third quarter when the Crows almost completely broke down but missed easy shots at goal.

The fans may also lament the Crows hitting the post four times up to three-quarter-time when they led by eight points, but the Eagles had their misfortunes too. Like any final, especially with a capacity crowd cheering for one side, it became a battle of chances amid the emotion. In this regard, the Eagles won against the flow, and deserve the credit.

Another big difference between the Eagles′ first and second halves was the ability of their forwards to dramatically lift their workrate. Adelaide was leading because its forwards pressured the Eagles′ defenders into mistakes and the tables turned suddenly.

It was an absorbing contest, full of pressure, ferocious tackles and heroics. It seemed as if the brilliance of Graham Johncock in the last line of defence, the high flying and marking of Burton and the explosive dash of McLeod would win the game, but it didn’t, for West Coast had its heroes, too.