Blues fail to make most of chances

Carlton had more of the ball than Melbourne. It controlled the ball for most of the game, had many more scoring shots and more entries in to its forward 50 metres. It was the better team for three quarters. And yet it lost by nine points. 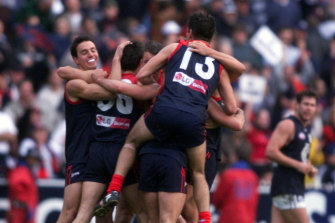 The Demons celebrate their win after the final siren.Credit:Pat Scala

How did this happen? Quite simply, the Blues failed to take their chances. The game felt over at three-quarter-time because they had controlled the play, but the margin was still only 21points. It wasn’t nearly enough against a team with fresh, younger legs that quickly gained the momentum in the last quarter.

If the merciful Blues, with a dominant midfield and defence, didn’t seize their opportunities in three quarters, the Demons did in their one quarter of fluent football. They discovered some potency late in the day, having struggled in attack for the most of the afternoon. 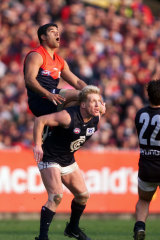 Demon Jeff Farmer gets a ride on Dean Rice.Credit:Pat Scala

What was surprising – and exciting, from Melbourne‘s perspective – was that the match-winners were not the usual suspects of David Neitz or Jeff Farmer, but a pair of first-year youngsters, Brad Green and Cameron Bruce.

Bruce had been a handy target for most of the game, without having a huge impact. Green had spent much of the first half on the bench. His presence in the Melbourne forward line, late in the third quarter, marked some kind of turning point for the Demons.

Farmer and Neitz had been shut down by Dean Rice and Glenn Manton respectively. David Schwarz had been competitive on Stephen Silvagni, but his ambition had sometimes exceeded his capabilities and he, too, had struggled.

Amazingly, it was the quick leading, strong-marking Green, the boy Manchester United tried out, who became the weapon Melbourne had lacked.

He booted his first goal in time-on of the third quarter. Within four minutes of the last quarter, he had three goals and Carlton, now holding clinging to a nine-point lead, was beginning to unravel. 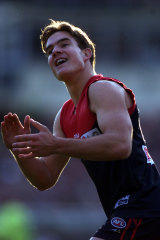 Suddenly, there was a swarm of red and blue. Jeff White jumped high, over Matthew Allan and Mark Porter, and thumped the ball Melbourne‘s way from the centre bounces. Schwarz barged through packs to dish out handballs to team mates, while Adem Yze and Andrew Leoncelli pumped the ball forward. The hard-running Daniel Ward, too, gave the Dees impetus.

Bruce goalled from a rare mistake by Andrew McKay and the lead was down to three points. Then, 16 minutes into the last quarter, Yze gave Melbourne the lead for the first time since early in the second quarter with a brilliant right foot soccer-volley from a pack in the goalsquare.

Green extended the lead to nine with a snap across his body. At this stage, it appeared that the Dees would run all over Carlton. The Blues, however, had one last lunge left. Ryan Houlihan roved the ball to kick a neat goal and, then Scott Camporeale found just enough space to centre the ball to Darren Hulme (the late replacement for hamstrung Craig Bradley). Hulme found Lance Whitnall, who calmly regained the lead for the Blues with about four minutes remaining. 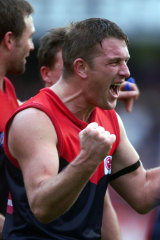 The game, which had not been of a great standard, found a gear in time-on. At the bounce immediately following Whitnall’s goal, Yze unloaded a long drop punt. Leoncelli gathered the ball in the pocket, and with a deft kick across his body, slotted the quick reply. A couple of minutes later Bruce evaded a mill of grasping defenders and snapped another from the edge of the goalsquare and Melbourne, lost for nearly three quarters, had pulled off one of the great finals heists.

Carlton did appear to lack legs in the last quarter. For most of the afternoon, its midfield supremos Brett Ratten and Scott Camporeale had enabled it to control possession. Matthew Lappin had been dangerous as a crumbing forward pushing up into the midfield and McKay had beaten everyone – including Yze in the third quarter. Silvagni and Manton and ruled the skies in defence.

They had the ball, but they missed too many shots and kept Melbourne, all but beaten in the third quarter, close enough to launch that last quarter strike.

PLAY OF THE DAY

On a day when a former soccer star, teenager Green, kick-started Melbourne‘s revival, it was appropriate that the score that gave the Demons the lead in the 16th minute of the final quarter would not have looked out of place at Wembley Stadium. As the ball broke loose in a crowded goal mouth, Melbourne midfielder Yze showed poise and balance and smashed the ball home soccer-style off the ground.

Silvagni (Carlton) v Schwarz (Melbourne): The Carlton champion had the better of the Demon star for the first three quarters as the Blues held sway. But Schwarz stepped up a gear in the final term as Melbourne surged home, earning “assists” with a key tackle and knock-on that resulted in late goals.

White/Simmonds (Melbourne) v Allan/Porter (Carlton): Porter started strongly, giving Carlton a marking edge around the ground as White struggled. But the Melbourne big man lifted several gears in the final term and was instrumental in sparking his side’s recovery.

Ratten (Carlton) v Woewodin (Melbourne): Woewodin has been a key player for the Demons all season, but Ratten, himself a top-liner all year for the Blues, kept him quiet for most of yesterday while being productive himself. Woewodin was, in fact, benched at three-quarter-time, but returned to play his part in the Demons’ improbable victory.

Neale Daniher (Melbourne): “Carlton played better football for three quarters but were not able to put us away. We got a sniff in the last quarter and with a young team hungry to achieve something, we got a roll on. (For) Brad Green to come on and kick four second-half goals really gave everyone a lift.”

David Parkin (Carlton): “I think performance indicators showed we were one-third better performed than them up to three-quarter-time. At no stage did we get a good result for our work … and that’s the story of the day.” — MICHAEL LYNCH