IT WAS a game the commentators could say had everything without as much as a hint of hyperbole. It will, no doubt, be remembered for the nail-biting closing seconds as Footscray surged forward with the Tigers three points ahead. 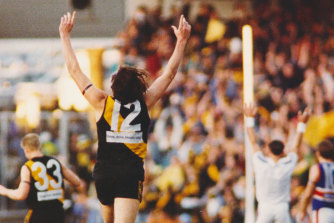 Tiger Matthew Richardson celebrates after the siren after Richmond beat the Bulldogs.Credit:Vince Caligirui

But even before that dramatic finale, when the Bulldogs did as much as any team could to overhaul a narrow lead, and Richmond rose time after time to deny them, there had been enough highlights, bumps, incidents and controversies to enliven a dozen lesser games.

There was, from Richmond centre half-forward Brendon Gale, an individual performance of heroic proportions.

Gale’s ability to get to the contest has never been in dispute, but so often his hands fail to seize the opportunities his strong body creates. Yesterday he held a dozen marks, none more important than in the final quarter when he twisted athletically to seize a Footscray kick-in, slipped a handball to Paul Broderick whose kick was marked by Matthew Richardson. Goal. 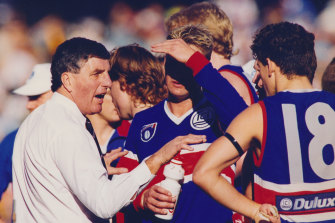 Only Gale’s poor kicking for goal let him down. He can queue with full-forward Matthew Richardson for extra shots on Monday night.

Their efforts were particularly important in the first quarter when Footscray’s Mark Hunter held sway in the centre, and the opening minutes of the second when the Tigers could not get the ball out of their own 50-metre area. 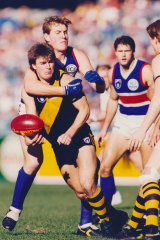 There was move and counter move. Richmond‘s running brigade Tony Free, Broderick and Chris Bond who held Tony Liberatore, did much of the damage as the Tigers kicked five goals in the second quarter, and forced Footscray to reorganise at half-time.

Liberatore went out of the centre, Steve Kolyniuk roved and Leon Cameron spent more time on the ball and became the Bulldogs’ most creative player. But still the Bulldogs could not give their tall forwards enough clear-cut chances.

There was high marking. Gale took several speccies, but Chris Naish stole mark of the day when he rose in the goal square in the second quarter and took the catch on the way down.

There was controversy. A Hawkins kick in the third quarter bounced off the goalpost to Chris Grant and eventually into the hands of Richard Osborne who kicked a goal. The goal was allowed, to the disbelief of the Richmond defenders. (Tiger fans might also have been writing letters to Bill Deller about a Richardson mark that was disallowed and a free kick to Tony Liberatore in the closing minutes, had the result been different.) There was comic relief. Footscray’s Danny Southern mowed down umpire Geoff Caulfield while in desperate pursuit of an opponent. At least, it was funny to everyone but Caulfield.

There was a brave comeback. Turner copped an elbow to the head and wobbled from the ground in the third term, but returned after three- quarter-time to complete his important assignment on Grant.

But, most of all, there was the closing minutes. Osborne missing a shot in the 18th minute to leave Footscray five points down. Chris Naish chasing down an opponent on the wing, which led to a goal by Stuart Maxfield just before time-on. Grant snapping a goal from 35 metres to make the difference just five points. Leon Cameron’s shot sailing toward the goal line, where it was touched by Gale – who else – who relieved Greg Dear in the ruck.

That left the ball in Turner’s hands, and his 70-metre kick-out got Richmond running into attack. This time Footscray repelled. The ball travelled forward. The siren sounded. Grgic marked unopposed seconds later.

They were the few seconds that divided victory and defeat, and two teams that deserved to win.

And so well did he do that after half-time his focus switched to Leon Cameron, who had caused some early damage against Matthew Knights.

Mark Hunter was matched with Tony Free and, later, Paul Broderick, while Scott West had the edge over Stuart Maxfield, and Simon Atkins was kept quiet at half-forward by Wayne Campbell. Stephen Kretiuk gave away 12 centimetres and four goals to full-forward Matthew Richardson, while the Tigers’ big hope at centre half-forward, Brendon Gale, saw off three opponents before moving to the ruck. At Footscray‘s end, Scott Turner stood Chris Grant until taking a knock to the head in the third quarter, while Stuart Edwards took care of the resting ruckmen.

HIGHLIGHT: Chris Naish may be better known as a goalsneak, but it was in the air that his most spectacular deed was done. In the second quarter he jumped very high and very early over a pack on the edge of the Richmond goal square. So astray was Naish’s timing that by the time he grabbed the ball his descent was almost complete. Still, the leap alone was worthy of highlight status; the resulting goal gave Richmond a 13-point lead.

COACHES’ COMMENTS: John Northey (Richmond): “I felt we should have buried them in the third quarter. We had plenty of chances. Maybe we just started to change our pattern of play a little bit and do things we normally don’t do because we were going pretty well at that stage, but we nearly let them back in the game. But full credit to the players. They’ve come off the ground absolutely stuffed and we’ve won the game.”

Alan Joyce (Footscray): “I thought we should have won. We did enough in the second half and the possession rate of our side was very high today compared with Richmond’s and we just couldn’t square it and put it through at the end. I suppose we just ran out of time. We didn’t play well early, obviously, but our second half was very, very competitive and we couldn’t just nail a goal when we needed one.”

HERO: If Brendon Gale could hold on to as many marks as he makes contests, he would be a matchwinner. Yesterday, the Richmond centre half-forward was exactly that. The marks stuck (12 of them), the opponents were disposed of (three of those), the possessions were accumulated (16 kicks, nine handballs) and, in the last quarter, he was even thrown into the ruck to replace a tiring Greg Dear and held two crucial grabs from kick-ins. “I thought he was terrific,” said Northey. “That’s probably the one disappointing thing about today’s game. We had a real winner in Benny and we struggled to get the ball down to him, particularly in the first half. He was taking every mark that came along … he’s just been terrific, Ben. Like all the boys.”