WA side lashed and thrashed 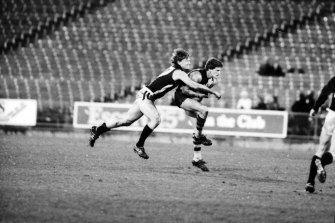 Dr Aylett said Swan Districts had “discredited” the WA national football league by sending an inferior team to play Richmond in a quarter-final of the championship at VFL Park last night.

Swan Districts, presently at the top of the WA competition, was so offended by what its officials described as the high-handed attitude of the VFL, that it sent an under aged team to play last night.

Its executives claimed last night that VFL chiefs and competition executives had not provided any explanation for the two changes of date for the quarter-final.

They also claimed that the Victorian body had rejected out of hand a proposal for Richmond to travel to Perth yesterday and play the game during the afternoon.

Last night’s affair was a debacle. With an average age of 19 and with only 69 senior games between them, the Swan Districts team was annihilated by 186 points. 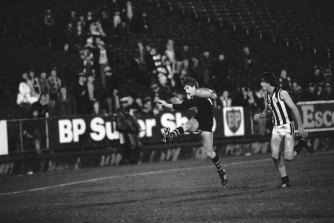 Dr Aylett said the question of WA’s future involvement in the competition would be discussed at a meeting of Australian Football Championships Ltd. next month. Dr Aylett, the president of the VFL and National Football League also is chairman of AFC Ltd.

“It is most irresponsible that a club that is part of the professional Australian Rules team acted in this way,” Dr Aylett said.

“I think it will have its repercussions. It has discredited the WA Football League.

“I concede that this time Swan Districts was on the wrong end, but there is no excuse for this action. It is totally unprofessional.”

Originally Swan Districts, conqueror of Collingwood and the only remaining interstate team in the competition, was to have played on 1 June. The match was then changed to 8 June and then to 22 June.

Dr Aylett said the match was changed first because of programming congestion at the time of the SA-VFL State of Origin game in Adelaide in May. The next change was made because of the reluctance of the organisers for the Swans and St Kilda to meet twice in just over 48 hours.

Dr Aylett said all competing clubs had a responsibility to sponsors and television interests.

“From this competition half a million dollars is given back to football for the game’s development throughout Australia,” he said.

Swan Districts executives were unrepentant last night. In pursuit of the club’s first premiership for 19 years under the direction of coach John Todd they said the issue was simply one of “priorities”.

However they did stress that had Richmond agreed to go to Perth yesterday it would have met the full-strength Swan Districts team.

Todd told his players before the game they would gain experience they had never dreamed of by playing such a formidable team as VFL leader Richmond.

There were some quite extraordinary achievements by Richmond players during the hopelessly one-sided contest. The most remarkable was the performance of forward and ruckman Michael Roach, who kicked 10 goals after coming off the interchange bench 14 minutes into the third quarter.

The only upsetting note for Richmond was the forced withdrawal of ace goal kicker Brian Taylor. He left the ground with a knee problem after kicking four goals.

Richmond was just a modest nine goals ahead at halftime but ran amok in the last two terms, kicking 11.2 in the third and 13.5 in the last.

Richmond’s massive tally was a competition record since it started in 1977. It will come as no shock to learn that it was also a record winning margin for the championship.