Barassi’s triumph was the end of Bob Rose’s dream 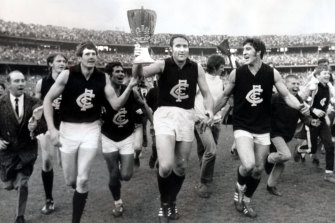 For 95 minutes of Saturday’s Grand Final against Collingwood the Blues had everyone fooled.

Then it happened. Carlton, with the uncanny timing of a perfect magician, pulled a masterpiece of deception.

A couple of quick goals were kicked, and suddenly all Collingwood had achieved earlier in the game no longer mattered.

It was a premiership win based on courage, and Ron Barassi’s greatest coaching triumph since he crossed from Melbourne.

I cannot recall any side coming from so far behind in a Grand Final to achieve what appeared to be the impossible.

When half time arrived it seemed the Blues had reached the point of no return. 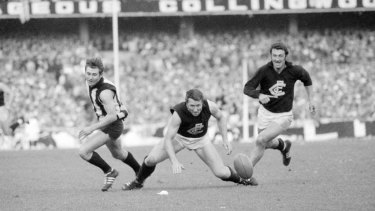 Richardson of Collingwood in action against Nicholls and Silvagni of Carlton during the 1970 Grand Final.Credit:The Age Archives

Until then, Collingwood had done everything right—everything, that is, but climax their efforts with goal-kicking accuracy.

Although the Magpies’ 44 points lead failed to flatter their supremacy in individual and team ability, it still looked more than enough to guarantee that, MCG jinxes or not, coach Bob Rose was at long last going to gain his first Collingwood premiership.

No Carlton player had been a problem, and all moves the Blues tried just fizzled dismally.

But how small things can make a difference… before the weary, crestfallen Blues had time to slump dejectedly on tables in the dressing room, they had to take a scathing tongue lashing from Barassi.

It hurt Barassi that so many players had let the public, the club and himself, as coach, down so badly. 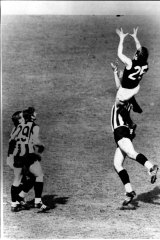 Carlton’s Alex Jesaulenko takes the ‘mark of the century’.Credit:Clive MacKinnon

Between them, six players, including John Nicholls, star of the second semi-final, had won only 10 kicks.

Even so, Barassi and his selectors decided that, while positional changes were warranted, they would wait until five minutes into the third quarter before making replacements.

But Barassi suddenly changed his mind. Minutes before players were ready to return to the field he dumped Thornley and brought in Ted Hopkins.

This move helped revitalise the Blues. In less than five minutes Hopkins had kicked two goals to start a Carlton avalanche.

In 13 minutes the Blues blasted a brittle Collingwood defence to pieces with seven goals, cutting the 44 points deficit to less than a goal.

Eight goals were kicked for the quarter, but the Magpies fought back to 17 points advantage and into the last quarter still appeared the winners.

They looked certainties when Len Thompson kicked a fine angle goal four minutes after the start of the last quarter.

But then Carlton took control. The Blues applied relentless pressure and minute by minute they squeezed all fight and resistance out of Collingwood. 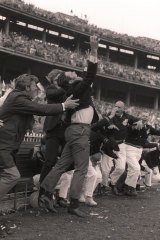 Five minutes before the final siren, Rose knew that what he feared was going to happen.

Brent Crosswell was free-kicked 30 yards out, straight in front, and his accurate shot put the Blues five points in front. It was the first time Carlton had led.

The crowning blow for Rose was to see the ball rushed down to Peter McKenna, who flew for a mark which appeared to leave umpire Don Jolley in two minds.

Collingwood players said after the game Jolley blew his whistle and they stopped, expecting McKenna to get the mark.

McKenna was about 40 yards out, dead in front of goal, an easy shot for him.

But Silvagni quickly got moving again, whipped the ball over the centre line, where it was grabbed by Alex Jesaulenko and, with a weaving run and a great left-foot snap, he booted a near freak goal. The premiership was over.

In defence of Jolley’s decision and Collingwood’s disappointment, I would not have paid the mark to McKenna. 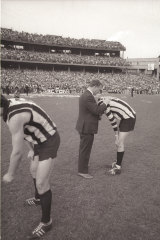 Nor can I find any excuses for the Magpies except to say never have I seen a premiership tossed away so blatantly.

The Magpies had far less excuse for losing on Saturday than was the case against St. Kilda by one point in 1966 and against Melbourne by four points in 1964.

All talk by players about, not letting Rose down again this year turned out to be little more than hot air. When the chips were down they failed Rose, and badly at that.

Unlike Carlton, there was not enough heart in the Collingwood side. The players could not meet the challenge of the occasion, and left a smear on the proud Collingwood tradition of fighting to the last gasp.

One of the main reasons for Collingwood’s failure was the over-concentration on getting the ball to McKenna.

McKenna only won two kicks in the second half, and both were in the third quarter. In the last quarter, he chased the ball six times without winning possession.

And when McKenna failed, the whole Coilingwood attack crashed with him.

Another reason why the Magpies fell away badly was because Wayne Richardson and Des Tuddenham, both tremendous influences as rovers in the first half, dropped out of play because of leg injuries.

It was because of their creativeness that the Magpies were able to wrong-foot Carlton so often early.

Carlton’s main asset was its evenness. All players pulled their weight in a team effort.

Barassi’s advice at half-time had a lot to do with this. “Go handball happy,” he ordered, and the Blues took him at his word.

It brought every player into the game and from that point on the Blues had winning teamwork.