‘When my name was called I was so overwhelmed I didn’t hear the rest’: Exeter lock and farmer’s son Jonny Hill reveals his reaction to Lions call-up and winding road to rugby’s top tier

At various stages of Jonny Hill’s career he has looked around and scratched his head, wondering quite how on earth events have occurred.

From rubbing shoulders with Ellis Genge, Ross Moriarty and Billy Burns at Hartpury College, to ending up a Double-winning Exeter Chief, England lock and now British & Irish Lion, the son of a Shropshire farmer often pinches himself.

‘You know when things happen and you just think ‘I don’t know what actually went on there’?’ he tells Sportsmail with a little grin, still floating from his selection by Warren Gatland at the start of the month. 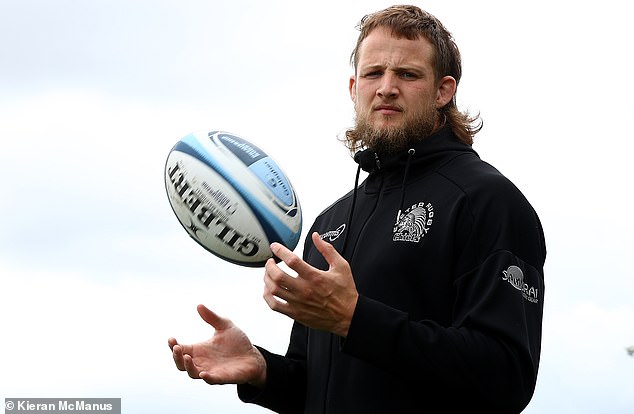 It is not to say he is not deserving – far from it – or lacks confidence in his ability, it is more that he has never quite believed things like this happen to lads like him. He continues, ‘I’ve always gone with the flow, I’m quite laid-back and enjoy it as I go.’

To understand why he was so star-struck picking up his 90 pieces of fresh Lions kit in south-west London earlier this week, as one of the chosen 37 to tour South Africa, it is worth winding back the clock.

As Hill himself puts it, he is from ‘the middle of nowhere’ – more specifically, a 150-acre farm near Ludlow where his dad Nick is a livestock dealing middle-man, while also rearing sheep and cows.

Hill’s older brother is in the midst of shearing season, not yet managing to deal with Jonny’s lockdown mullet. If supporters were allowed to South Africa Nick would not have travelled anyway, as he has not owned a passport since 1988.

‘He’s just a farmer!’ laughs Hill. ‘He likes to watch by himself, his own space.’

Hill would have been more than content continuing the family line, farming in the week, then spending winter Saturdays turning out for Luctonians RFC and summer ones bowling left-arm seam-up for Corvedale CC – before piling into pints in the pub. 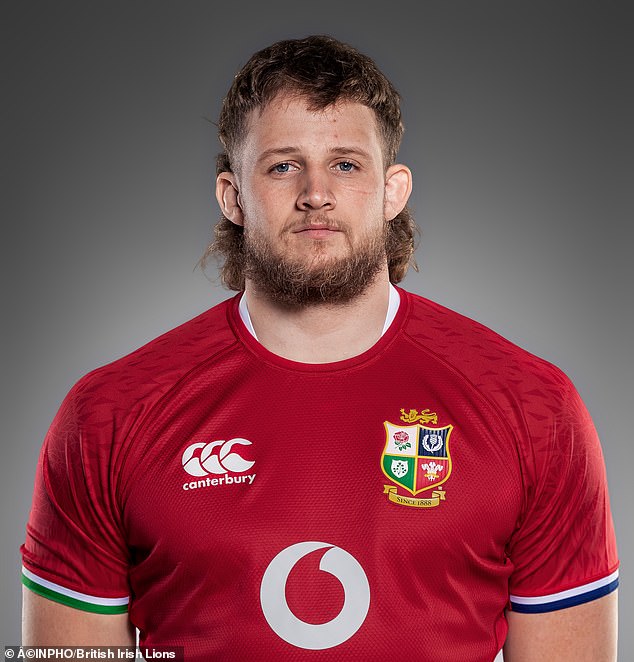 ‘My best figures? I did get 6-14, something like that, once. I looked the other week when talking to Jamie George – he and Elliot Daly are very good cricketers. They used to rub shoulders with England cricketers Jason Roy and Sam Billings – I play with the farmers down the road!’

Hill did totter down to Luctonians RFC to join the under-9s, but then drifted away to football – the lanky lad on the left wing – following friends. By his mid-teens Friday nights were pub darts with Ben and Ricky.

‘Everyone else would play consoles in the evening at 14, but we played darts for the Salwey Arms pub in Ludlow!’ Hill explains, surely now first pick for arrows in the Lions bubble.

‘I used to enjoy that. My best checkout was 125. We played for at least a season and used to practice every night in the bedroom, throwing at the board.’

Professional rugby was never a path Hill thought he would take. ‘When I started at Luctonians it was seven-a-side and really fun,’ he says. ‘I enjoyed going down each Sunday, although remember dreading it sometimes as it was freezing cold!’

Having packed that in the twist of fate a pre-growth spurt Hill did not know he needed was not making it into Worcester College when leaving school.

‘I was very under-developed at 16, and rightly wasn’t selected at the trials,’ he goes on. ‘I gave it a miss, worked for a year on the farm, just to see what would happen. I played a bit for Luctonians again in a Midlands colts league, against sides like Worcester, Moseley, Bromsgrove and Stourbridge. 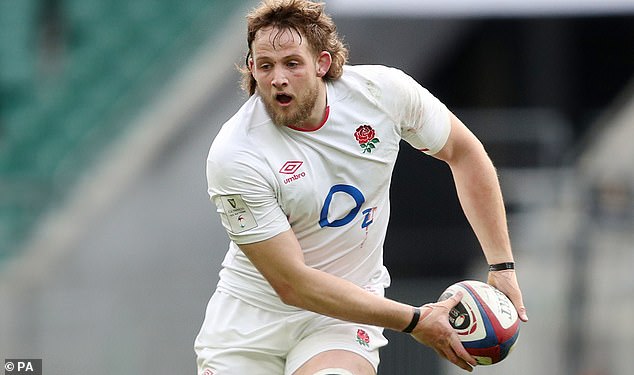 Hill has been capped nine times by his national side under boss Eddie Jones, scoring one try

‘We enjoyed ourselves… Luctonians is in the middle of nowhere, so we had a few decent bus trips, like now at Exeter! Not many stories from those are printable…! We were playing under-19s so were all legal to drink, so it was the first introduction to team socials.

‘The coach Simon Green-Price was really good. One night he said ‘you should genuinely think about going to Hartpury College – you’ve got things people can’t coach’.

I said ‘what do you mean?’ He said ‘well you’re 6ft 7in, very tall, skilful, can catch and pass. There’s not many people in the country like that so give it a go’. That was the turning point.’

Having applied to Hartpury – alma mater of Jonny May, Alex Cuthbert, Dan Robson and clutches of others who went on – he attended the first walk-up rugby trial with 400 others paddling several feet out of his depth.

‘I couldn’t believe it – a little farmer boy from Ludlow here with all these England under-16 and 18s; the best team you could play for at the time. I felt I didn’t belong. They had calls for defence; like ‘red’ was line-speed blitz or something. I thought it was crazy.’

They liked him there. Soon he was in the 1st XV and played two games for England Under-20s alongside Maro Itoje. Gloucester picked him up, but a horrible ankle injury stunted Hill’s progress. 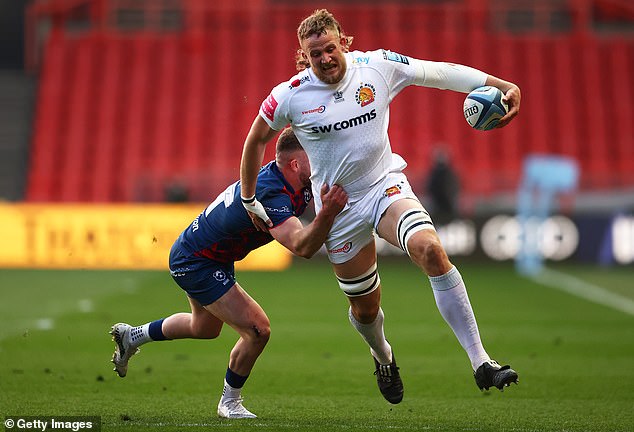 Out for months and with a contract winding down his prospects were bleak. At one point surgeons drilled holes into his foot to encourage bone growth as his ankle was not healing alone.

Then director of rugby David Humphreys – who had never seen Hill play – ummed and aaahed about a new deal. Exeter saw potential, and quickly swooped.

‘Again it’s one where I don’t really remember the process but I ended up at Exeter within two weeks,’ remembers Hill.

That was 2015, when he was 21. He found his home at Sandy Park. With Dave Ewers and Cuthbert he part-owned a horse for a while, Cotton Vale trained by Christian Williams in Ireland.

‘We went to watch its only win at Fakenham in 2019, as well as Ffos Las, Exeter, Newton Abbot,’ Hill says. ‘At the time it was a typical Exeter Chiefs horse, kept coming second!’

When rehabilitated and having played around 30 Chiefs matches, by 2018 Hill was a shock pick for the England tour of South Africa.

Eddie Jones’ men toiled at altitude, then won in Cape Town while Hill and two other future Lions in Luke Cowan-Dickie and Sam Simmonds were left unused substitutes alongside Alec Hepburn and Ben Spencer. Hill was not to be seen again in English white for two and-a-half years. 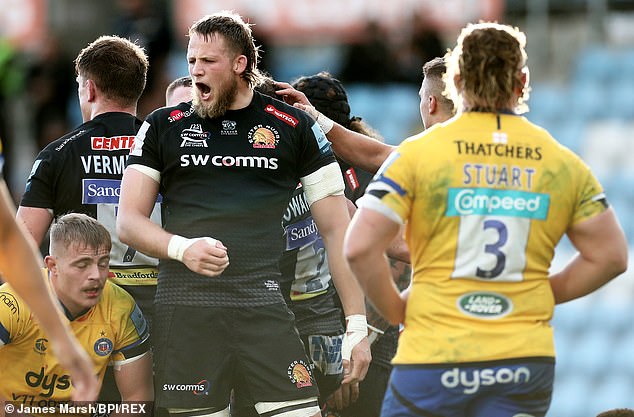 Reflecting now he says: ‘I’ve seen footage and photos of me and think ‘I wouldn’t have picked me either’. I looked young and immature. I needed to grow up, to play more games.

‘I remember going and realising what those guys do – Mike Brown, George Ford, Chris Robshaw –thinking ‘wow, this is a lifestyle. Professional elite rugby you’ve got to be on it all the time.’ You can’t walk into a skills session half-cut, not concentrating.’

Matured now, Hill has had a remarkable few months, lifting the Premiership title, European Cup, Six Nations and Autumn Nations Cup one after another. Now he is a Lion-in-waiting.

The Chiefs were even more shocked than Hill as he had not told anyone he received a letter telling him he was in contention, in case he didn’t make it.

Four Thursdays ago he quietly retreated home alone, as his Welsh netballer and junior doctor girlfriend Sarah was studying at university, to tune into the announcement on SkyGo via his PlayStation.

‘I got home around quarter past 11 and thought ‘this is going to be a long wait’ so started doing random jobs – cleaning, tidying up – to waste time!’ says Hill. 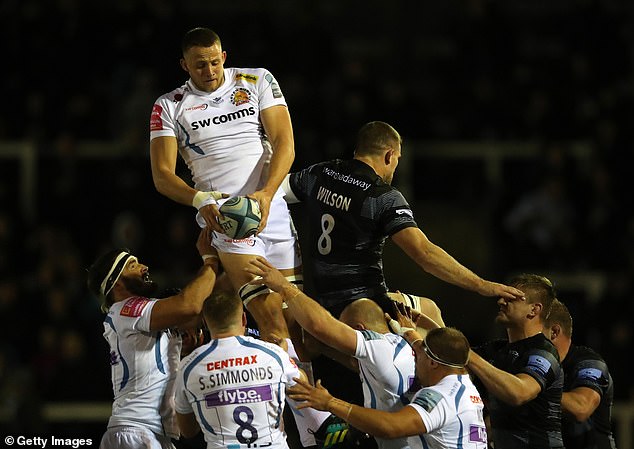 ‘When my name was called I was so overwhelmed I didn’t hear the rest of the forwards. I had to look back to see that Sam Simmonds had made it – I was over the moon for him. It was a day I’ll never ever forget. Surreal. Crazy. Honestly, crazy.’

Hill perhaps should not have been so surprised, as he has Lion genes. Maternal uncle Paul Loughlin was a rugby league Great British Lion in 1988 and 1992 from full-back.

‘I was born in 1994, but growing up and seeing the sheer size of him, how big, strong and athletic he was, I always used to be in his ear asking about rugby and tours,’ says Hill who idolised Irish great Paul O’Connell watching videos of the 2013 series.

On that trip was Hill’s new locking partner Alun Wyn Jones, with whom he will have an immediate bond.

‘My girlfriend lives 100 yards from him in Swansea!’ Hill laughs. ‘I’ve been going out with her for a while now and so have been knocking around his area for a long time too! It’s strange how things work out.’ That just about sums it all up for Hill.

‘I’m so lucky to even be in the reckoning – then to play potentially against the world champions, it gives me proper goosebumps thinking about it,’ he concludes. ‘It’s something I haven’t even dreamt about. You say ‘it’s a dream’, but this is beyond dreaming.’