Port Adelaide recruit Orazio Fantasia is already feeling mentally and physically better following his move home to South Australia from Essendon, while new Bombers man Jye Caldwell was attracted to the club because of greater opportunity to play. 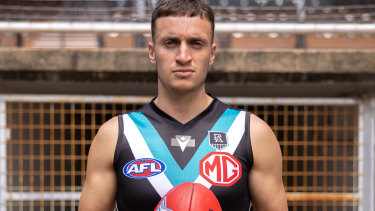 Essendon traded Orazio Fantasia and pick 73 to Port Adelaide for pick 29 and a future third-round selection on Thursday, the last day of the 2020 AFL trade period.

Fantasia had wanted to get to Port Adelaide in last season's trade period but a deal could not be done.

The Bombers then got Caldwell from GWS, along with pick 44 and 74, with Essendon giving back pick 29 and a future second-round selection.

Fantasia told reporters on Friday that his body, which has been a problem over the last few seasons, was feeling good.

“I already feel refreshed and feel like I’m training better. This is my happy place," Fantasia said. 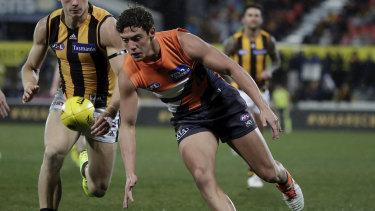 Jye Caldwell in action for the Giants. Credit:Alex Ellinghausen

“As soon as I met with all the medical staff here, I could tell they’re all on the same page and I think their injury rate is number one in the league at the moment so that’s played a big part for me.”

“I chose the Bombers because I thought they have a really good group coming through and I spoke to Truck [coach Ben Rutten] a few times and I really like the way he goes about it," he said.

“It’s close to home as well.

“They’ve said to me I will be playing that inside mid role … and trying to be more versatile.

“It wasn’t an easy choice. I had some hard conversations … it was more the opportunity I will be hopefully getting at Essendon.”