A cluster of leg injuries to Bombers Dylan Shiel, Jye Caldwell and Sam Draper have compounded a 54-point loss to Port Adelaide on Saturday for Essendon.

The Power look set to maintain their place on top of the AFL ladder for the 20th consecutive round after producing a relentless and merciless style of football at Adelaide Oval, inflicting a 0-2 record on Essendon to start the 2021 season. 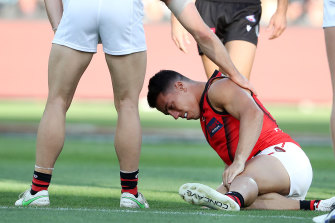 The former GWS Giants midfielder, who moved to Essendon in the off-season in search of greater opportunities, had nine kicks and a handball to his name before pulling up with a left hamstring injury.

Substitute Tom Cutler entered the field with five minutes to play before three-quarter-time, before ruckman Sam Draper was put on ice with a left ankle injury.

But the day got worse for the Bombers when midfielder Dylan Shiel was carried off by two trainers early in the last term. Shiel emerged from the rooms on crutches half-way through the final quarter, with fears of a medial ligament injury.

Shiel will have scans, and Bombers coach Ben Rutten said Essendon’s depth would be seriously tested. “Jye’s just a hamstring, Dylan’s a knee and Draper’s kind of a high ankle,” he said. “The doctors don’t think it’s an ACL [for Shiel], but it’s just locked up a little bit so he’ll have some scans and work out exactly what it is. Not great.″⁣

Rutten was hopeful that skipper Dyson Heppell would be available next round after he was ruled out pre-game yesterday, having had a back spasm on Thursday.

Third-year player Zak Butters amassed a career-best 36 disposals for the Power, along with six clearances, six tackles and a goal.

Port Adelaide’s ability to play the game in their forward half proved key to their dominance.

They had 12 tackles inside-50 to five, highlighting the pressure from their small forwards, and 62 inside-50s to 39 showcased the difference between the two sides. 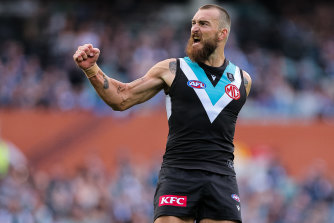 Charlie Dixon was a powerful force up front for Port Adelaide.Credit:Getty Images

The home side had nine individual goal kickers, led by Dixon (4.2) and Georgiades (4.0). The two talls took 13 marks between them and were repeatedly delivered the ball on the lead.

After starting the season 0-2, the draw doesn’t get any easier for Ben Rutten’s men.

Next Saturday afternoon they’ll meet St Kilda on a fast Marvel Stadium deck, before facing the rejuvenated Sydney Swans away from home. Brisbane in round five and Collingwood on Anzac Day won’t make it any easier after that.

After thrashing North Melbourne in round one, Port Adelaide will get a true litmus test in the next fortnight with games against West Coast away and Richmond.