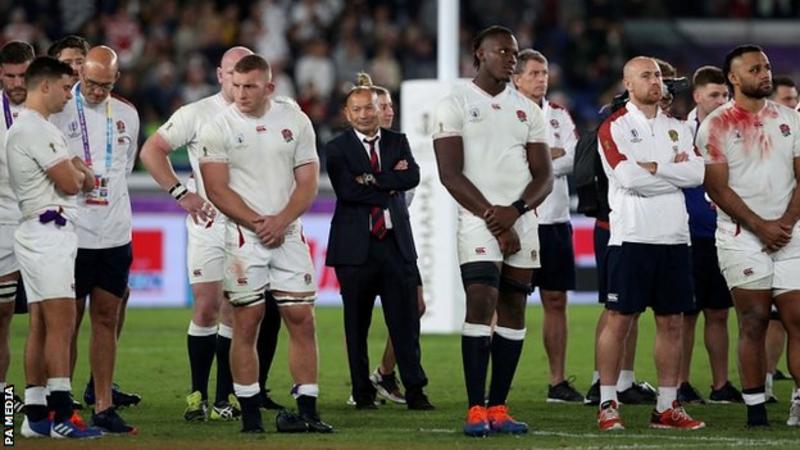 The England XV that started the 2019 Rugby World Cup final was the youngest ever to play in rugby union’s showpiece, with every member of the starting side 30 years of age or younger.

However, head coach Eddie Jones – with his new deal locked in – believes a squad evolution will be necessary before France 2023, saying the current team ‘doesn’t have another World Cup in them’.

While Jones will no doubt retain a core of the squad to try and go one better in France, he will be actively looking for a player – or five – to burst onto the scene like Tom Curry and Sam Underhill, the young flankers who made their debuts just two years before taking the Japan World Cup by storm.

The Rugby Union Weekly podcast team of Chris Jones, Danny Care and Ugo Monye discuss who to keep an eye on over the next few years in three key areas.

‘Eddie is no stranger to making a big call’

CJ: Eddie Jones says there could be a 60% squad change by 2023. A lot of the 2019 team will be in their 30s. And as Mike Brown, Chris Robshaw, James Haskell, Dylan Hartley and yourself Danny found recently, Eddie Jones has no problem moving people on quite close to the main event.

DC: Eddie is no stranger to making a big call. The ages don’t particularly worry me as long as you have four, five, maybe six coming through that are in their early 20s and bring some energy, exuberance and are a bit different. But if you don’t have those kids coming through, you don’t need to force them in if they aren’t going to be good enough.

CJ: The glaring areas for me where England need depth are at scrum-half, number eight, and in the midfield. Ben Youngs played well in the Six Nations but he will be 34 in 2023, while England need cover for Billy Vunipola who will be 30 and for Manu Tuilagi who will be 32, especially as both have bad injury records.

‘He reminds me of you Danny’

DC: For me, a scrum-half who is exciting and a bit left-field is Ben Vellacott, who signed for Wasps but did his ACL and hasn’t played this season. But he is a very quick, running nine. I think Alex Mitchell ticks all the boxes you are going to need to be an international scrum-half, but I want to see him playing more for Northampton. With Cobus Reinach leaving, he will get the exposure that he needs. Then there are two Maunders at Exeter, Jack Maunder, who I toured Argentina with in 2017, and his younger brother Sam Maunder, who are both very good scrum-halves.

UM: I’ll add a couple more names to that list: Harry Randall at Bristol, and Jack van Poortvliet at Leicester. Jack is highly regarded and apparently is someone who can really come through – although 2023 may come a bit soon.

DC: For Harry to go to the next level he needs to work on his core skills a lot. But he is definitely a guy who will bring any team a spark.

UM: Randall reminds me of you Danny, aged 19. He is so energetic, such a livewire, and he is playing in a team in Bristol which is allowing him to do that.

‘He’s as quick as Jonny May’

DC: To get through now you have to be a bit different. Curry and Underhill were different to what we had before. An example of that for me is Harlequins centre Joe Marchant who has gone to Super Rugby with the Auckland Blues. Why did he go? Because I think he had a conversation with Eddie Jones who said he needed to experience a different environment to go to the next level. He will come back a better player.

UM: To add to the midfield options, Ollie Lawrence at Worcester. He is raw, really powerful, he likes to keep the ball alive, has a lovely outside break and is defensively really strong. I would massively keep your eyes on him.

And in the back three, Ollie Sleightholme at Northampton is hugely rated – he is as quick as Jonny May and is certainly someone to look out for, while it will be interesting to see how Ollie Hassell-Collins develops at London Irish. Meanwhile, Newcastle full-back Josh Hodge is already on Eddie Jones’ radar. He is also rumoured to be interesting Exeter Chiefs, which shows how highly he is rated.

DC: When you talk about number eights, I see Alex Dombrant as the natural successor to Billy Vunipola, or someone who can play alongside him. I would hope he has three years now before a World Cup to get into the team. There are not many better in the game at the moment at doing what he does.

Someone else I have been massively impressed by is Worcester back-rower Ted Hill, who I played alongside for England when he made his debut in 2018. For one of the shyest guys I have ever met, on the pitch he is an animal. He is like Superman, like Clark Kent putting his kit on instead of his cape, and he runs through people for fun. Ted has got everything and is going to get loads of caps in his career.

Who do you think could break into the England team in the next three years? Have your say by commenting in the section below.