After a period of "either sulking or planning", the All Blacks are moving on, admits their new head coach, Ian Foster. There was no third World Cup crown in a row last year in Japan, after England produced the kind of physical performance in the semi-final that New Zealand rarely come across.

Foster was part of Steve Hansen's coaching staff that day in Yokohama and is now at the start of his own reign in charge. The pain of that defeat certainly lingered for a while, but no more. 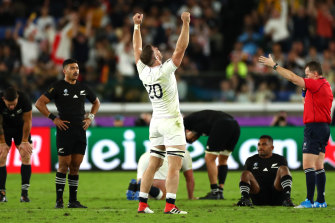 "We were a group where there wasn't a single player in our 31-man squad who had lost a game at a Rugby World Cup. So, Japan hurt," Foster admits. "It does not matter how well you prepare, it is what it is. You get reminded of it and you have two choices. Either sit back and think 'woe is us', or accept that's sport, we were beaten on the day and we have to be better. To be fair, we are just starting to get excited about a new challenge. There is no point mulling too much over the past."

Fortunately, Foster is no stranger to the New Zealand set-up after eight years as an assistant to Hansen, a run that included an unbeaten calendar year in 2013 and the World Cup triumph in 2015.

However, his appointment was far from automatic. Foster faced fierce competition from Scott Robertson, fresh from guiding the Crusaders to their third straight Super Rugby title. Riding with the hot hand in Robertson might have made sense to the New Zealand Rugby Union. Foster's pitch had to be good. It must have delivered.

"I didn't go into it thinking I was competing with other people. I went into it being tough on myself. Did I have a plan for this group that I felt was going to be the right thing for the All Blacks?" Foster said last month in Paris. 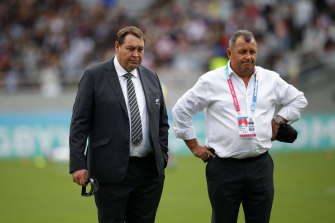 "I spent a lot of time planning that, worrying about that. But actually, once I had it clear in my head, the process was relatively simple, because all you have to do is go in and say, 'Here is my plan'. I am sure they were presented with some other really good plans, but they chose mine and I have to deliver that."

Whether his predecessor, Hansen, had an easier start following on from the 2011 World Cup win is debatable. Foster is certainly well qualified. After close to 150 appearances at five-eighth he coached the Chiefs to two Super Rugby finals during a seven-year spell before joining Hansen's staff. His own group contains John Plumtree (forwards), a smart appointment to go with Scott McLeod (defence) and Greg Feek (scrum).

It was only once Foster joined the All Blacks set-up eight years ago that the top job came on to his radar.

"I never had it written down on a bit of paper that I wanted to coach the All Blacks," he admits. "But I think once I was fortunate enough to get the [assistant] job, afterwards I felt I was almost accountable to the group to stand [for the head coaching role]. On the basis that, if we really believed in what we had done over the last eight years, and we felt there was some good stuff in there, then it was clear that I was the one to put my hand up and go forward with that. I felt a degree of responsibility, but also it is a massive privilege to do the job. Let's just go and have some fun with it." 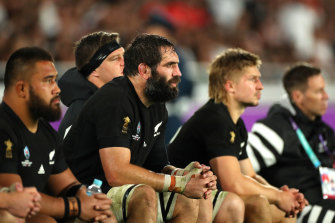 Sam Whitelock and his All Blacks teammates nervously look on from the bench during the Yokohama semi-final.Credit:Getty

In terms of personnel, Foster believes this is a better starting point for the All Blacks than post-2011 and post-2015, with more experienced players available. Consider some of the names who hung up their Test boots after winning the final at Twickenham five years ago: Dan Carter, Richie McCaw, Jerome Kaino, Keven Mealamu, Ma'a Nonu and Conrad Smith.

There are holes to fill at lock and No.8, with Brodie Retallick on sabbatical and Kieran Read having retired after winning 127 caps. But in New Zealand, as Foster notes, there is always someone.

Foster's contract runs only until the end of 2021, although, as he points out, two-year contracts have always been standard practice for All Blacks head coaches. Warren Gatland is now back in New Zealand coaching Foster's former side, the Chiefs, seemingly waiting in the shadows. Robertson too, plus the unattached Joe Schmidt. That pressure to deliver immediately, Foster believes, is something to embrace, rather than fear.

"A two-year deal was on the cards for whoever got the job. Personally, I would not have it any other way," he says.

"We're coaching the All Blacks – we have to go well. And if we don't go well, it doesn't matter how long your contract is, you still have to be the right person in that seat on the bus. That's my job – to make sure that I am the right person."