Talk of creating footy's newest dynasty will surround Richmond this week as they shoot for their third premiership in four seasons but that will be far from the minds of players, according to ruckman Toby Nankervis.

Nankervis was a colossal presence in Richmond's preliminary final win over Port Adelaide on Friday night, making a series of crucial interventions at pressure moments of the match. 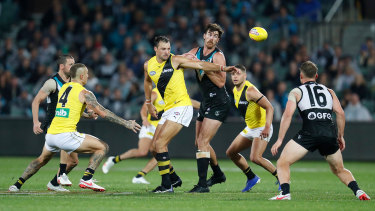 Tigers chief executive Brendon Gale famously pledged in 2010 that the club was aiming to win three premierships by 2020. Incredibly, this is within reach.

"I don't think we reflect on that too be honest," Nankervis said on Saturday. "We are focused on reviewing the game from last night, [then] take some learnings out of that and watching the game tonight [Brisbane v Geelong preliminary final] and focusing on next weekend.

"We just focus on each week. I know it sounds mundane but the competition is so tight and so even. We know we have to show up, give our best effort to give ourselves a chance."

Nankervis missed a big chunk of the season after round five, one of a host of Richmond's front line players sidelined this season due to injury or supporting their partner's through child birth.

The ruckman, Dion Prestia, Bachar Houli and Shane Edwards were top of that list and all had the extra hurdle of completing their paths back to footy through strict quarantine and hub protocols.

"I think we're all just grateful to get the opportunity to play footy after what seemed [a] pretty difficult time early on," Nankervis said.

"It was disappointing to get injured early in the season, I suppose with the difficult season we've had being away from the group for parts there.

"First couple of weeks, I was back round 14 or 15, it did take me a few weeks to get match fit. I feel like the more footy I have played the more I feel I can run out games, I certainly feel pretty good.

"I am so wrapt to just be backed within the team and give ourselves another chance.

"I still think we are probably as a team starting to play our better footy this time of year but I can't wait for this week."

Indeed hitting their best form at the right time of the season has been a feature of Richmond's 2017 and 2019 premiership wins and the story looks similar ahead of next week's grand final.

Nankervis praised teammate Tom Lynch, who was booed heavily at the Adelaide Oval.

"He handled it pretty well Lynchy. The crowd provided an amazing atmosphere last night and I think that's just a minority event," he said.

"He is a great person, a great teammate and a great friend. One of the nicest blokes."