Rookie coach Dean Young has been widely endorsed to be the man to steer St George Illawarra next year, but Dragons star Ben Hunt believes the club would be best suited to appoint an experienced coach.

The Red V's $6 million man also said he would have no problems being reunited with Wayne Bennett if the club were serious about luring the veteran back.

Hunt is signed until the end of 2023 and has plenty of interest in who the club appoints to succeed Paul McGregor. 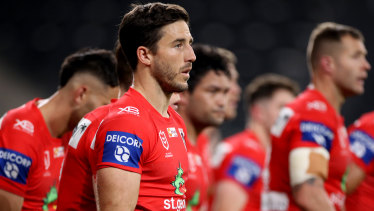 "Straight away you start thinking about which coaches are available.

"There's been talk about what we've done with the past couple of coaches and how we've hired within.

"In my opinion I think an experienced coach is probably the way to go.

"We have a young group, I'm 30 and I'm the second eldest in the group. 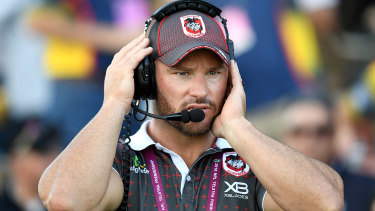 High regarded: Dean Young takes charge of the Dragons for the first time on Friday night.Credit:Getty

"With Wayne I'd happily play under him again. We had an up and down ride at Brisbane, but I always thought he was a great coach and he did the right thing by the team.

"If he did get the job I'd be happy. I respect him and I'm pretty sure he respects me. He always gets the best out of the players he's got."

Hunt has been impressed with Young who starts his six games in charge as caretaker coach on Friday night against the Broncos.

What he lacks in experience, Hunt said, could be offset by having Shane Flanagan supporting him.

"We've only had a few days at training but Deano has been very clear about what he expects from us and what he wants," said Hunt, as he took time out from a VB Thirst promotion this week.

"Deano hasn't given me a long-term plan but as of right now he'll keep playing me at No.9, we spoke about how our team is set up at the moment and he thinks that's the best position for me the rest of this year.

"He is pretty solid in what he wants from players and he sticks with it and drives it. He demands we're 'on' whenever we start training."

Hunt is determined for the Dragons to succeed. He has lost count the number of times he has been asked about the pressure that comes with his whopping price tag, with the Queenslander taking up an option for 2023 during the COVID-19 shutdown.

The Dragons are definitely his home, even though his former club and Friday's opponents Brisbane could do with his experience and playmaking qualities.

While the Dragons' fans demand excellence, Hunt said their expectations were nothing compared to those in love with the Broncos.

"They've had a lot of success up there, and when you lose a few games it feels like the whole city turns against you," said Hunt, who spent nine seasons at Red Hill.

"Every day I look at my phone something new pops up about that club. I've still got some good mates there. It's tough because you go out and do your best, you don't get the results, and it's hard to perform each week when there's so much going on around the place."

The Dragons stunned the Eels last week in McGregor's farewell game, but know repeating it will be a big challenge.